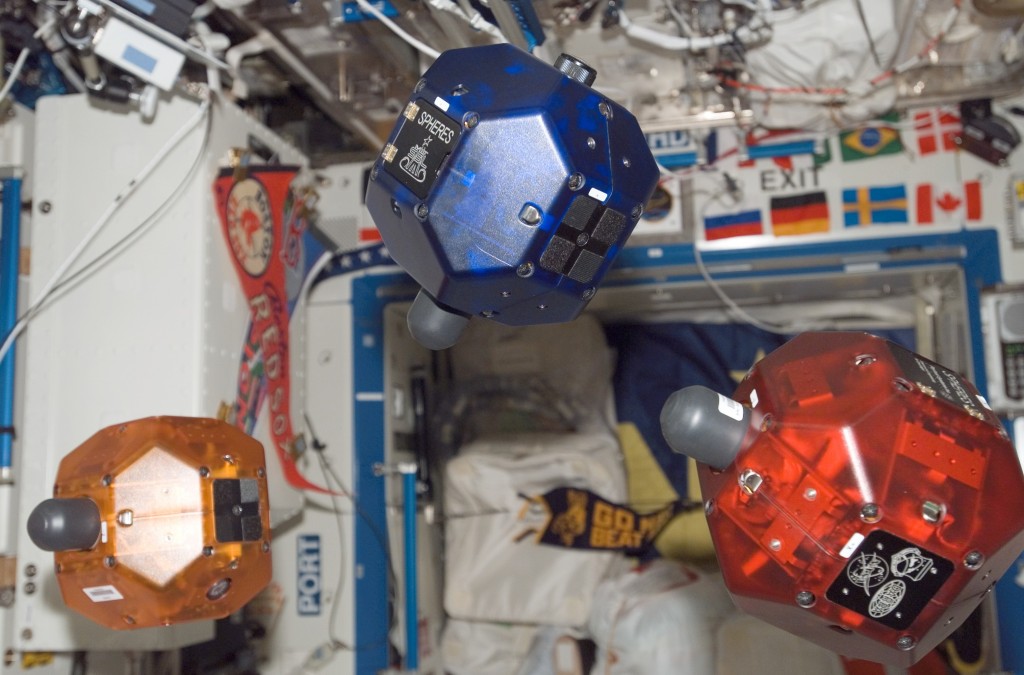 No one is too surprised to meet robots on the International Space Station – its Robonaut has posed for dozens of photos with astronauts – but a floating ball with an Android smartphone and multiple cameras aboard may turn heads.

No one is too surprised to meet robots on the International Space Station – its Robonaut has posed for dozens of photos with astronauts – but a floating ball with an Android smartphone and multiple cameras aboard may turn heads.

No one bats an eyelid at a robot on the International Space Station – its humanoid Robonaut has posed for dozens of photos with astronauts – but a Google Android reportedly “inspired by Star Wars” is a bit different.

CNET reports that a “floating” robot controlled by three customized Android smartphones will be shown off to the public this week in California.

If all goes to plan, the controllers for the robot SPHERES will launch on June 10th, on board an Antares rocket. Details of NASA’s research can be found here. The floating robots were inspired by Star Wars – “as all good things are,” says NASA’s Terry Fong. The Android-powered robots are built for 3D mapping, and are inspired by a Star Wars scene where Luke Skywalker uses a floating robot to train his lightsaber skills. They map areas rapidly using a combination of techniques such as cameras and infrared sensors.

The increasing use of Google’s open-source OS is perhaps surprising in ultra-secure institutions such as the ISS. One report claimed that Chinese hackers had infiltrated systems with crucial data on the station – although this was disputed. Chinese Taikonauts have visited the station, despite the nation’s plans to build their own.

Rumors also suggest that the 3D imaging technology will be available in consumer products – soon. The Wall Street Journal reported that tablets equipped with Tango’s mapping hardware will be unveiled at Google’s I/O conference this year, possibly in a new Nexus 8 tablet.

For consumers, the devices would allow indoor mapping – plus step-by-step indoor navigation for the visually impaired, and could also be used in videogames, the Journal reported. Tango is also widely expected to be used in autonomous flying vehicles.

In ESET’s Threat Trends Report our researchers said 2014 would see an escalating increase in serious threats targeting Android phones and tablets – ESET detections of such malware increased more than 60% between 2012 and 2013. This trend is predicted to continue in 2014. The version used in SPHERE is expected to be heavily customized, however.

“Project Tango is an attempt to create a mobile device unlike like any other, a mobile device that shares our sense of space and movement, that understands and perceives the world the same way we do,” Google said.

Popular Science magazine reports that the robots have in fact been on board the space station since 2003, used to test the effects of microgravity on various materials.

Google’s Androids will provide enough brainpower for the SPHERES to map the interior of the ISS, according to the magazine’s report. They’ll keep track of the 20,000 individual objects on board the space station, and track dangers such as pockets of CO2.

“Astronauts typically use handheld instruments for these tasks. And they have to be carried out all the time,” said Terry Fong of NASA. “A robot’s not complaining if you have it working on something all the time.”