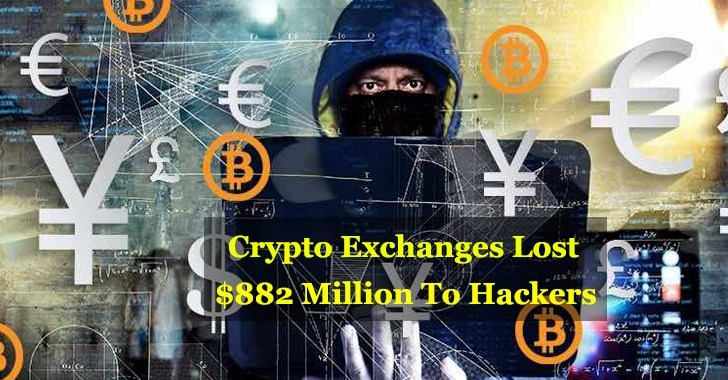 According to a new analysis report, targeted cyber attacks on cryptocurrency exchanges resulted in a total loss of $882 million in 2017 and the first three quarters of 2018.

More than 14 crypto exchanges were hacked and the major attacks are linked to North Korean hackers from Lazarus state-sponsored group.

The cybercrime report published by Group-IB includes in the annual Hi-Tech Crime Trends 2018. Group-IB an international company specialized in the prevention and investigation of cyber crimes.

Spear phishing remains as the major attack vectors on corporate networks, the hackers used to send fake CV with the subject line “Engineering Manager for Crypto Currency job” or the file «Investment Proposal.doc» in attachment with malware embedded said Group-IB.

In 2017 and with the first three quarters of 2018, the number of crypto exchanges gets compromised. You can find the complete list here. Yapizon, Coinis, YouBit, Bithumb, Coinckeck are the five exchanges targeted by Lazarus group.

“Last year we warned that hackers competent enough to carry out a targeted attack might have a new target – cryptocurrency exchanges,” — reminded Dmitry Volkov, Group-IB CTO.

According to Group_IB report, in 2017 more than 10% of funds raised through ICOs were stolen, while 80% of projects disappeared with the money without fulfilling any obligations towards their investors.

Phishing remains as one of the major attack vectors targeting ICOs, around 56% of all funds stolen as a result of phishing attacks.

The attack on ICOs remains as a threat for potential investors, whereas the Phishing and malware will remain the most tangible threats for private crypto investors.