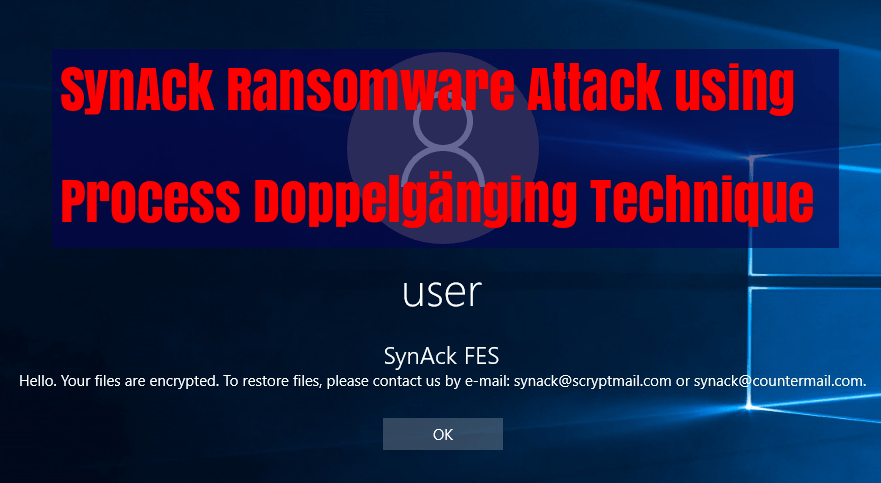 SynAck is the first Ransomware using this modern Anti-analysis and anti-detection techniques(Process Doppelgänging) to evade the security and take over the victims machine to perform further attack process.

Process Doppelgänging is a technique to injection hidden code into the legitimate file which is also called hollow process injection that helps to inject the malicious code into legitimate Process.

In this case, SynAck Ransomware variant  NTFS transactions to run a malicious process and make the process looks like legitimate one.

During the infection, it utilizes the Fileless Attack that helps to make it as an invisible process and evade the all security software.

Same as other ransomware families, SynAck Ransomware employee various infection vector to compromise the victims to encrypt the system files.

Unlike other Trojan executable for initial infection, SynAck attempt to use the various method to maintain its persistence and initially dropped Trojan executable is not packed instead of that, it thoroughly obfuscated as part of Binary obfuscation Technique.

Later on, it performs deobfuscation function where SynAck Ransomware attempt to import the various DLL’s from WinAPI and researchers extracts the constants and calculates the hashes.

Calculated the hash values of the functions exported from Windows system DLLs by researchers and matched them against the values required by SynAck reveals following API Functions are used by SynAck Ransomware.

According to Kaspersky Researchers, “During the Execution of earlier stage Trojan perform a check to find out whether it has been launched on a PC from a certain list of countries. To do this, it lists all the keyboard layouts installed on the victim’s PC and checks against a list hardcoded into the malware body.”

If it finds any relevant countries SynAck Ransomware sleeps for 300 seconds and call the ExitProcess DLL to exit the computer and stop encrypt the victim files.

SynAck ransomware using a combination of symmetric and asymmetric encryption algorithms where it using the Public key for encryption and private key for decryption which is stored in secret server.

Later it starts the encryption process and Encrypts some random data using AES key later it saved encrypted data as the encrypted_unique_data buffer.

After the complete encryption then desk files will be added with ransom extension and it terminates the processes and services also Clearing the event logs.