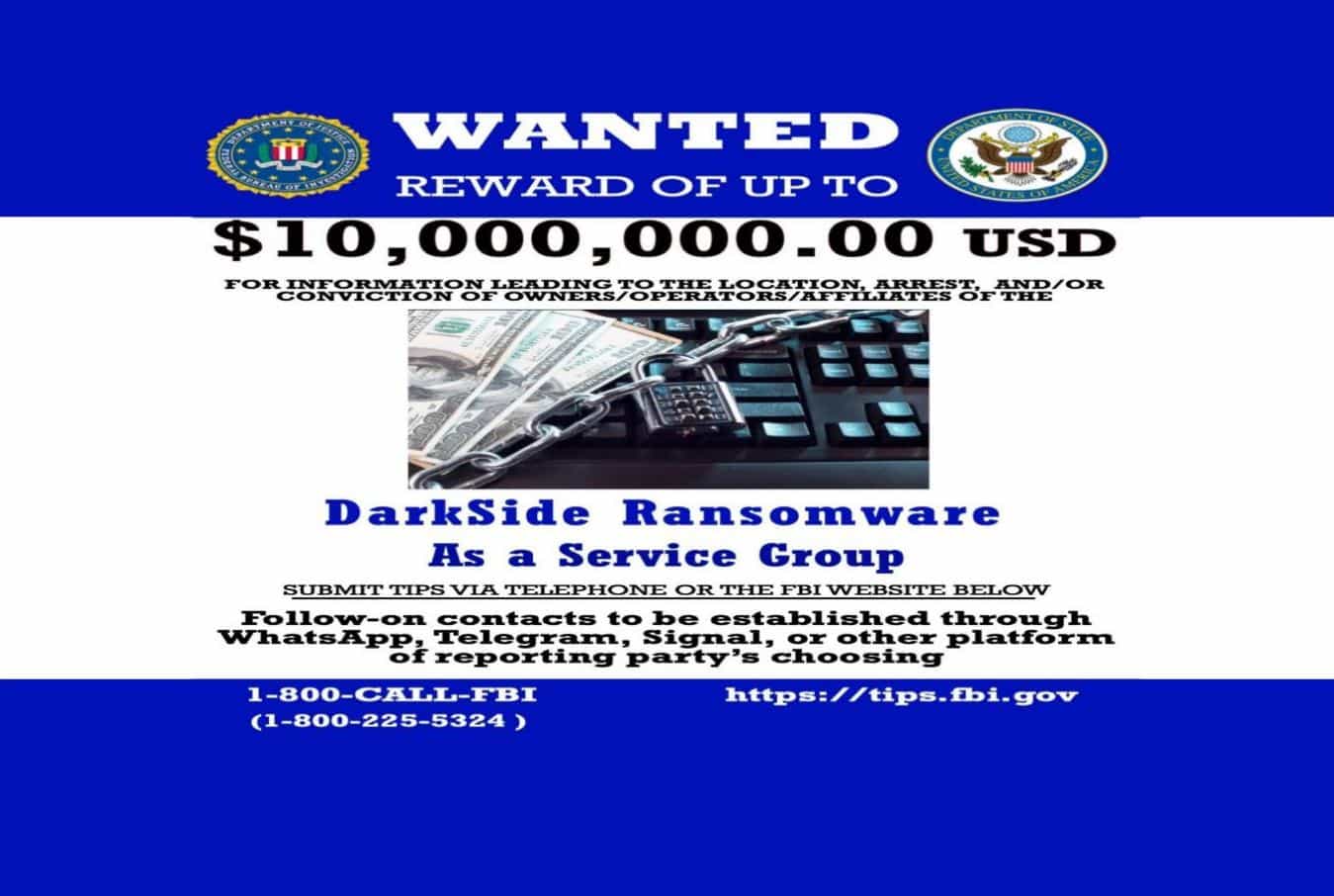 The U.S. Department of State is paying an additional $5 million to anyone who can provide information leading to the arrest or conviction of any individual in any country “conspiring to participate in or attempting to participate in a DarkSide variant ransomware incident.”

The U.S. Department of State is offering a whopping $10 million reward to anyone who can provide information to law enforcement authorities on the infamous DarkSide ransomware gang that may help in locating and arresting its operators.

According to a press release published November 4th, 2021, the Department is also offering an additional $5 million to anyone who can provide information leading to the arrest or conviction of any individual in any country “conspiring to participate in or attempting to participate in a DarkSide variant ransomware incident.”

The Department is offering the reward under its Transnational Organized Crime Rewards Program (TOCRP). For your information, the DarkSide ransomware gang, which commenced operations in August 2020, was known for its high-profile cyber attacks including the one against The Colonial Pipeline in May 2021.

The Colonial Pipeline is the largest pipeline system for refined oil products in the United States. The cyberattack not only crippled its supply but had shut down 5,500 miles of pipeline along the East Coast. The Pipeline ended up paying a $5 million ransom to the gang only one day after learning of the attack.

The demise of the DarkSide gang

However, a week later on May 14th, 2021, the cybercrime gang announced it was shutting down operations after its servers were seized and some unknown actor drained the cryptocurrency from the account the group used for its payments.

On June 8th, 2021, it was announced that it was the FBI that managed to recover millions of dollars in ransom from the DarkSide ransomware gang. A live-streamed joint press conference from the US Department of Justice (DoJ) and the FBI revealed that $2.3 million worth of cryptocurrency (63.7 Bitcoin) had been recovered from the operators of the DarkSide ransomware gang for compromising the country’s major pipeline.

The group further claimed to only target large profitable corporations. “No matter how bad you think our work is, we are pleased to know that we helped change someone’s life, the October 2020’s press release said.

If you have any decisive information about the DarkSide ransomware gang you can get in touch with The U.S. Department of State through its official website. You can also contact the FBI since it has offices around the world.

In offering this reward, the United States demonstrates its commitment to protecting ransomware victims around the world from exploitation by cybercriminals. The United States looks to nations that harbor ransomware criminals that are willing to bring justice for those victim businesses and organizations affected by ransomware, said the press release.