The online hacktivist group Anonymous has been missing from the limelight for a while but now, the group is back and vows to carry out a doxxing operation against Q-Anon and expose the real identity of whoever is behind it.

Doxing is an activity in which the hacker searches for the target’s personal information and then publicizes those details, leaving the targeted person vulnerable to cyber attacks.

What is Q-Anon group?

Q-Anon is a pro-Trump conspiracy collective who made headlines after claiming to have high-level clearance in the government of United States and that the country is run by the deep state. Q-Anon also claims that President Donald Trump and Special Counsel for the United States Department of Justice Robert Mueller are trying to fight the forces behind the deep state.

Q-Anon gained popularity from 4chan’s /pol/ message board back in October after a user going by the online handle of “Q” began posting that they have access to enough details to expose how the US government actually works and who the real players are.

If you are not aware of 4chan than it is an anonymous imageboard website mostly popular among far-right and pro-Trump members. Moreover, recently, Pro-Trump supports were also seen wearing t-shirts and carrying posters in support of Q-Anon during Trump rallies in several cities across the United States. 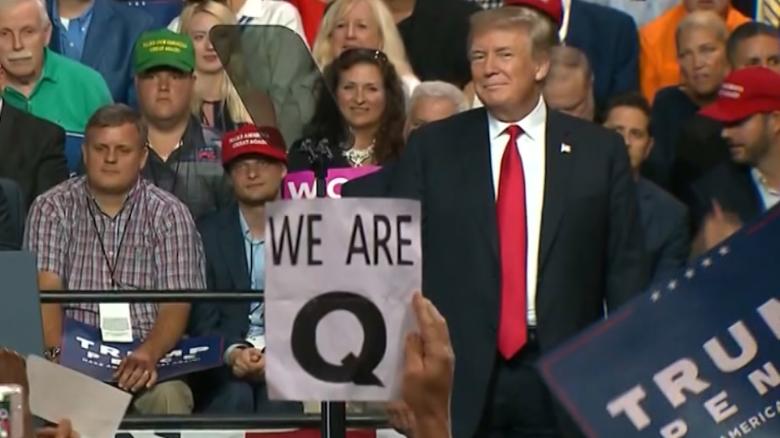 A poster in support of Q-Anon at one of Trump’s rallies.

In a 3 minutes video mocking Q-Anon and its supporters, the online hacktivist group Anonymous has announced they are going after Q-Anon and will expose the identity of whoever is behind the conspiracy.

“We all knew who was responsible for Q, and we thought the insanity would end with a final punch line of lulz – yet u 8 chan freaks never delivered that shit. Nope, you tossed it aside and let it grow into a deformed Alex Jones conspiracy thought bubble,” Anonymous said in the video.

We gonna wreck you, vows Anonymous.

Anonymous has a history of successfully hacking its targets. In August last year, the group conducted a massive DDoS attack on the official website Charlottesville city, Virginia website and forced it to go offline. The attack was part of OpDomesticTerrorism, an online operation that began against the hit and run incident in which a number of activists were hit while protesting against the rally organized by a group of white supremacists.

In 2016, Anonymous also doxed Roosh V (Daryush Valizadeh), a pick-up artist and his family for his pro-rape tweets. The attack forced Roosh to cancel his meetings.