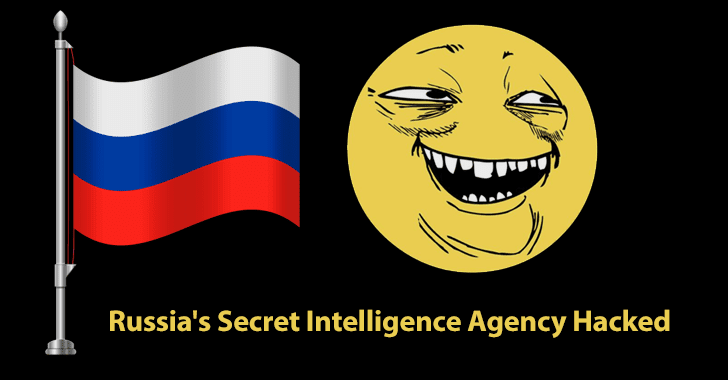 Intruders leaked the dozens of data that related to non-public Internet projects such as how Russia trying to de-anonymization of users of the Tor browser, collecting information about users of social networks, and isolate the Russian internet operation from rest of the world.

The hacking attempt took place on July 13, 2019, by 0v1ru $, an unknown hacking group who have recently created their Twitter account where they posted screenshots of the folder “Computer” allegedly belonging to the victim.

Among the different pictures that they posted in the Twitter account, one picture indicates the total amount of information – 7.5 terabytes.

During the attack, Hackers defaces the FSB contractor site “Sytech” and changes the image with a wide smile and smugly squinting eyes called “Yoba-face”.

Along with this image, hackers also posted an interface of the internal network, later sent those documents to another hacking group called  DigitalRevolution who shared those data to journalists of several publications in Russia.

The project called Nautilus-S that was developed by SyTech in 2012 by request of the Research Institute “Kvant” to de-anonymize users of the Tor browser.

“One of the results of this work was to be “a database of users and computers actively using Tor networks,” BBC Reported by according to documents merged by hackers.

Unlike the previous project, Nautilus named without C developed a period of work (2009-2010) and their cost (18.5 million rubles) is to planned to collect data on social networks such as Facebook, MySpace and LinkedIn.

A project that woked by SyTech during the period of 2013-2014, in which Saitek tried to find a vulnerability in the BitTorrent network protocol.

According to the Document Sytech had to explore “the possibilities of developing a complex of penetration and covert use of peer-to-peer and hybrid networks,”

SyTech’s other project called “Mentor” was designed for 2013-2014, to monitor email at the customer’s choice.

“According to the documentation provided by the hackers, the Mentor program can be configured so that it checks the mail of the required respondents at a specified time interval or collects the “mining group” using the specified phrases.”

Website “Sytech ( https://www.sytech.ru/ )” is not available – neither in its previous form nor in the version with “Yob-face”. BBC reported.