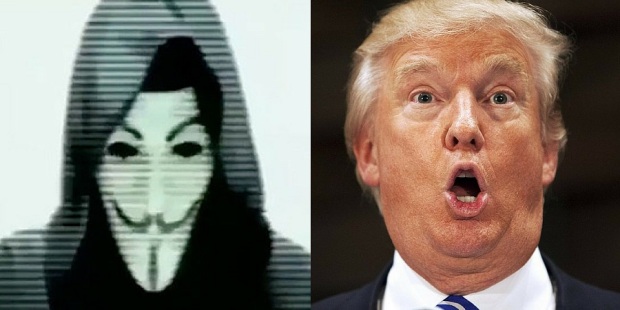 Short Bytes: The decentralized hacktivist group Anonymous has again tied their shoelaces to run after the Republican Presidential candidate Donald Trump. In a newly released video, the Guy Fawkes Mask representative declared a “total war” against Trump and encouraged hackers all around the world to participate in the planned DDoS attacks.

Anonymous, the decentralized hacktivist collectiveis back with a new cyber-campaign which is actually a dormant operation that has been reignited after a couple of months. In a newly released video, the familiar Anonymous representative wearing Guy Fawkes Mask has declared a “total war “ against Donald Trump who is a United Stated candidate for the presidential elections. The collective, starting from April 1, has planned a series of DDoS (distributed denial-of-service) attacks to bulldoze Trump’s election campaign websites. Their actions are the consequence of their officially “Declared War” against trump in December last year.

Dear Donald Trump, we have been watching you for a long time and what we see is deeply disturbing. Your inconsistent and hateful campaign has not only shocked the United States of America [but] you have shocked the entire planet with your appalling actions and ideas. You say what your audience wants to hear but in reality you don’t stand for anything except for your personal greed and power.

Donald Trump, the widely outspoken American businessman has been very much sincere in advertising his political  candidacy with public propaganda and statements that overcrowd news portals every day. The 69-year old New Yorker was much criticized about his statement in which he expressed his desires to keep the Muslim community out of the United States. I agree, some evil minds who claim to be the part of the said community have caused destruction to the human society and that’s heartbreaking. But it doesn’t make sense to kick out the whole community in order to repay the sins committed by some people.

The masked guy has encouraged “every able person with a computer to participate in this operation” to take-down Donald Trump from the internet and ruin his election campaign. It is a “Call to Arms” from Anonymous.

Anonymous listed the websites – namely trump.com,donaldjtrump.com and trumphotelcollection.com – which are a part of the list of websites which will be DDoSed by the hacktivist group.

Over the years, Anonymous has evolved from an inspiring group which worked as a helping hand for causes like the Oklahoma Hurricane Sandy disaster in 2013, for gathering clothes for homeless people during winters, and for fighting ISIS. But now, all they are doing is hacking hospitals and defacing websites of companies.

Check out the Anonymous’s video: