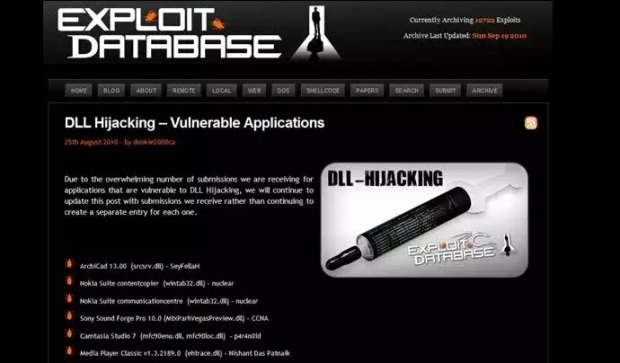 A number of weeks back, security researcher Parvez Anwar posted a number of DLL hijacking vulnerabilities within Microsoft Office on Twitter [1]. The following week, Microsoft released MS15-132, which addressed some of these vulnerabilities, along with a large number of very similar bugs reported by others in various guises. [2] [3].

The vulnerabilities that were uncovered were reported to affect various versions of Microsoft Office, on various versions of Windows. They could be triggered from within .docx, .rtf, and .pptx files, abusing the way in which Windows loads embedded OLE objects (and subsequently, any CLSID registered COM object), from within an Office document.

However, to provide a basic overview of what is happening in these specific vulnerabilities:

Now with that background out of the way, it’s time to talk about exploitation. Traditionally, DLL hijacking exploits have required that the user launches the malicious file from an SMB or WebDAV share. This is because, when launching from a remote share, the current directory for the document will be the share from which it was launched. The attacker obviously controls this, and thus can easily “plant” the malicious DLL within the same directory as the document. In this post we are going to discuss how an attacker can use a number of quirks in both Office and Firefox in order to exploit these issues remotely, without the need for SMB or WebDAV.

To exploit this issue remotely, we are going to use a number of known issues and tricks. The first of these relates to a temp file dropping issue in Microsoft Office. This issue was discovered by Haifei Li, after its potential use by attackers had been seen in the wild [7]. For this trick to work, an attacker simply has to embed their payload within an RTF file, using the Package ActiveX control. When the RTF file is opened, the attacker’s payload will be dropped into the user’s %TEMP% folder, retaining its original name (unless it already exists within the %TEMP% folder, in which case the name will be suffixed with a number, e.g. <filename> (2).<ext>).

In our exploit, we will take advantage of this known issue to embed our payload, oci.dll. This can be achieved simply by dragging and dropping our malicious DLL into our exploit document, and saving it as .rtf. Now when re-opening the document, you will see the file oci.dll get written into the current user’s %TEMP% directory:

The second trick we will take advantage of is the fact that Mozilla Firefox uses the current user’s %TEMP% directory as its default download directory when selecting “Open With” in Firefox’s download dialogue.

When a user downloads a file using Firefox, they are prompted with two choices (as seen below): “Save As”, and “Open With”.

We can exploit this behaviour by crafting an RTF file which includes both our embedded “Package” ActiveX control, and the vulnerable object, one after the other. When the document is downloaded from the attacker’s web server (and the “Open With” (Microsoft Word) option is chosen) via Firefox, two things will happen:

Firstly, oci.dll will be dropped into the user’s %TEMP% folder.

Secondly, the object is loaded, causing Microsoft Word to attempt to load the DLL oci.dll from the current directory.

As the current directory is now %TEMP%, the attacker’s payload will be executed by Word.

The following demo video shows how it was possible to take advantage of these issues in order to gain remote code execution via Firefox:

Microsoft Edge and Google Chrome both use the user’s “Downloads” directory for storing downloaded files, and do not prompt before downloading files. This can be misused by an attacker, using an “auto-download” attack; whereby the attacker can force the user’s browser to download the attacker-supplied DLL in addition to the crafted document. When the document is opened, the DLL will be loaded from the “Downloads” directory (where it has just been downloaded to, using the auto-download method).

The example below shows how it’s possible to force a DLL to be downloaded using the <iframe src=”oci.dll”> method:

This technique has also been documented recently by Haifei Li [8].

Note that on both Google Chrome and Microsoft Edge, an additional warning will be shown if the downloaded file (i.e. attacker’s DLL) has a low reputation. Note that on Edge, the warning is only shown until the next file is downloaded and doesn’t actually prevent the file from being downloaded. So using the PoC above, the warning message is only shown briefly until the .docx file is dropped, at which point it’s masked by the “Open” dialogue.

Microsoft have released MS15-132, which addresses the DLL Hijacking vulnerabilities discussed in this blog post, however this patch does not address all of the issues that have been publically disclosed. Furthermore, due to the wide attack surface exposed by OLE, specifically for this class of vulnerability – we can expect more vulnerabilities of this nature to be discovered, and potentially exploited by threat actors in the near-future.

We contacted Mozilla for a workaround/fix for the shared %TEMP% folder and they responded saying it is a bug in Microsoft Windows/Office as opposed to Firefox.