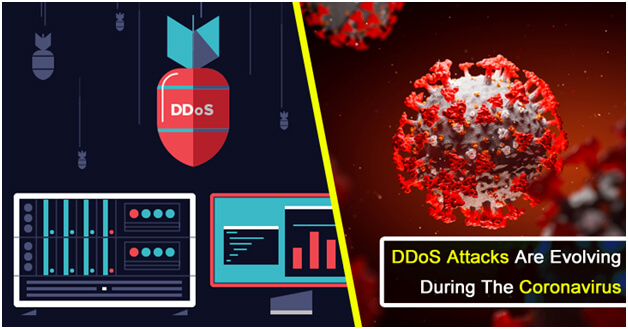 The denial of service attacks (DDoS) causes a system or service to be inaccessible to a legitimate user. We have seen a diverse range of DDoS attacks that have affected many users around the world used by the cybercriminals and government-backed hackers.

“A DDoS attack can cause a web page to become unavailable when receiving thousands of requests at a specific time,” for example, to make you understand the scenario better.

According to the latest security reports from several security portals and firms, the use of DDoS attacks has doubled during the last quarter for which there are records.

And to make it more efficient, the attackers are adapting several lures and baits related to the deadly COVID-19 or Coronavirus pandemic.

In short, the cybercriminals and government-backed hackers are taking the real advantage of Coronavirus to evolve the efficiency of DDoS attacks.

Apart from this, the problems that are present in these types of attacks is the consumption of resources in computers, like bandwidth, memory space, alteration of the configuration, information, interruption of physical network components, etc.

What is DDoS Attack?

As a result of such an attack, the servers serving the site are forced to process an excessive amount of false requests, and the site becomes inaccessible to a simple user, as told earlier.

There are three forms of DDoS attacks, and here they are listed below:-

DDoS Attacks Are Evolving During The Coronavirus Pandemic

According to the reports, the main causes of the increase in DDoS attacks is the rise of remote work. Everything related to the COVID-19, due to which the whole world is living in quarantine, and this situation has caused major alterations in all sectors.

Moreover, the average duration of attacks has also grown by 25 percent year-on-year. But, it does not affect everyone equally, as the attacks on educational resources and the official websites of towns and cities have increased threefold compared to the same period of the last year.

Apart from this, several security companies have also reported that overall they have recorded DDoS attacks on schools and cities accounted for almost a fifth of all security incidents in the first quarter of this year 2020.

In short, the DDoS attacks are more present than ever, as they have increased by two times compared to the previous quarter, although in some cases it has gone further.

Ultimately, the current global crisis, COVID-19 pandemic, has shown us that cybercriminals will always take advantage of any situation, and organizations must be ready for anything. Currently, we are seeing a higher number of ransomware attacks in healthcare organizations, and according to the reports, this situation will get worse. DDoS protection should be in place to mitigate the attacks.

Managed DDoS protection is essential for every business to stay cyber-resilient and to maximize the effectiveness of security initiatives by implementing secure solutions with proper methods.

How does a DDoS attack happen?

There are mainly three types of DDoS attacks, but they are logically divided into two types: attacks on the network layer and application layer part of the server.

When there is too much data, the server unable to process the data and stop responding; as a result, the site becomes unavailable or inaccessible to all its visitors.

Meanwhile, during an attack on the application layer, an attacker can do a more targeted attack on a vulnerability of a application to deplete some of the server’s resources like the processor power, RAM, the number of processes, or connections to the database and this will not require too much compute power for the attacker to carry out the attack as it will be targeted.

As the server uses some of the resources every time a visitor performs an action on the site, and to make you better understand here we have an example, “when a visitor enters login details for an account, the server checks them and sends back the next page or shows an error.”

In this case, what the attackers do, they simply find the requests on which the server consumes the maximum of its resources, and then they send a huge amount of fake requests until it becomes inaccessible.

In most scenarios, attackers use botnets and automated tools to conduct a DDoS attack.

How to prevent a DDoS attack?

DDoS mitigation is an ongoing journey and the first step is to partner with experts who can provide not just software, but the expertise to manage it with