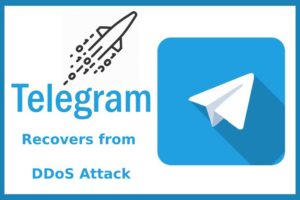 Telegram Messenger, which had suffered a DDoS (Distributed Denial of Service) attack recently, has reportedly recovered from the same and everything now seems stabilized, as per reports.

A ZDNet report, dated June 13, 2019, says, “Telegram Messenger has recovered from a distributed denial of service (DDoS) attack that hit its platform on Wednesday, telling its 200 million-plus users that for the moment, things seem to have stabilised.”

On June 12, Telegram had intimated users via Twitter about the DDoS attack. The Tweet said, “We’re currently experiencing a powerful DDoS attack, Telegram users in the Americas and some users from other countries may experience connection issues.”

Telegram even explained, in a rather funny and interesting manner, to users as to how DDoS attacks work- “A DDoS is a “Distributed Denial of Service attack”: your servers get GADZILLIONS of garbage requests which stop them from processing legitimate requests. Imagine that an army of lemmings just jumped the queue at McDonald’s in front of you – and each is ordering a whopper… The server is busy telling the whopper lemmings they came to the wrong place – but there are so many of them that the server can’t even see you to try and take your order.”

The users were also told how cybercriminals use botnets to make a DDoS attack almost similar to a “zombie apocalypse”, and also that it’s just about overloading the servers, thereby not at all impacting data security.
Eventually, Telegram told users that everything is ok and that things seem to have stabilized.

The fact that the timing of the DDoS attack on Telegram coincided with the Hong Kong extradition law protests organized on the platform has been pointed out. There are inferences that the attack was launched mostly from China. Telegram founder and CEO Pavel Durov has tweeted, “IP addresses coming mostly from China. Historically, all state actor-sized DDoS (200-400 Gb/s of junk) we experienced coincided in time with protests in Hong Kong (coordinated on @telegram). This case was not an exception.”

Massive and violent protests are going on in Hong Kong opposing the government’s plans to pass a bill that would allow extraditions to China. The protests were largely organized on Telegram, Facebook, Twitter and other messaging apps, like WhatsApp and Signal. The South China Morning Post had reported that protestors were using encrypted messenger apps to organize themselves, share intelligence and avoid police detection. The report also says that a Telegram group administrator was arrested on suspicion of conspiracy to commit public nuisance.

Telegram has played a key role in the organization of the protests as it allows the creation of groups for up to 200,000 people or to create channels for broadcasting to unlimited audiences. Moreover, it is seen as a secure way to communicate and avoid China’s strict surveillance regime as it allows encryption of messages. The South China Morning Post points out that though news about the current protests is being shared over Facebook and Twitter, much of the sensitive information sharing and coordination is done using Telegram and Signal. The report also says that the public is now more concerned about privacy especially after the Facebook data breach by Cambridge Analytica and the fast development of big data and surveillance technology in the mainland.

The South China Morning Post quotes Lokman Tsui, a professor at Chinese University researching media and technology, as saying, “People are smarter around technology now. They are using tech in a way that doesn’t give you away.” The report adds that according to Professor Lokman Tsui, some apps, including Telegram, are not safe as protestors assume them to be. He points out that messages over Telegram are not encrypted by default and that most people don’t know that they have to actually turn on the encryption feature.

How to Protect Businesses Against DDoS Attacks