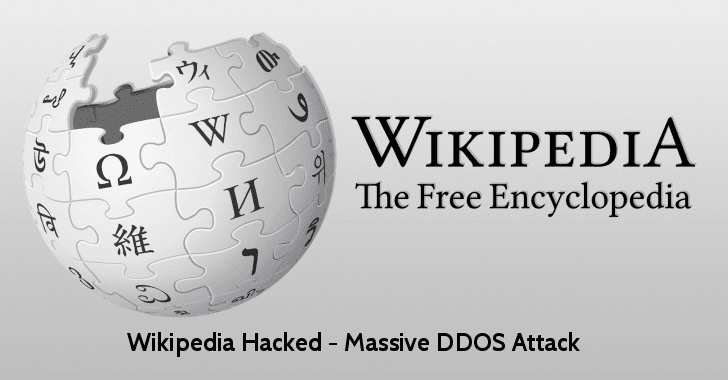 Wikipedia Hacked: cybercriminals have launched a massive DDOS attack on Wikipedia and take down the website in several countries in Europe and parts of the Middle East.

Wikipedia is a global encyclopedia and worlds biggest knowledge repository accessed by more than a billion users every month.

DDoS Attack is one of most dangerous threat for any organization and the attack main aims to exhaust the resources of the website, network, application or service, and eventually disrupts the normal functioning of the server and can result in a slowdown of performance and take down the website and cause various technical impacts.

Due to the DDOS attack, Wikipedia went offline Friday noon to Saturday morning, and the spokesperson from Wikimedia Foundation said Wikipedia Hacked with “malicious attack” hit the Wikipedia and it took it offline across many countries.

Wikipedia German Tweets that ” The Wikimedia server of @Wikimedia Foundation, which also hosts Wikipedia, is currently being paralyzed by a massive and very broad DDoS attack. #Wikipedia and her sister projects are therefore temporarily unavailable. Sorry!”

Wikipedia over-popularity always attracts the cybercriminals, at the same time Wikipedia build with a sophisticated and complex security environment.

During the press release, Wikipedia experiences the ongoing attack, and their engineering team was working hard to stop and restore the website and applying the advanced security measures.