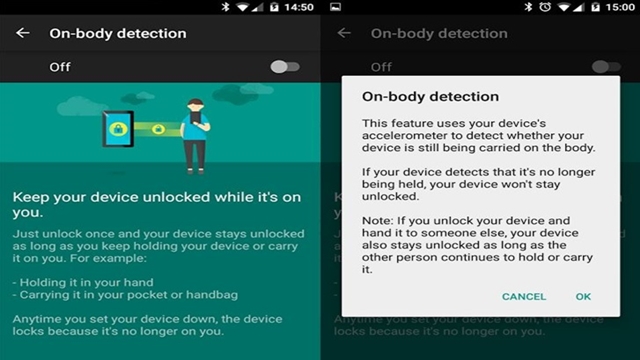 The new on-body detection feature will lock your phone when you set it down, so thieves who swipe it can’t access your data as easily.

You need to protect your smartphone specially while on the go but it is also a fact that we unlock our smartphones about a dozen times daily even though it isn’t necessary.

However, Google has been striving to find a solution to this problem and now it has gotten hold of it. Google has introduced a new Android feature which if enabled will keep your smartphone unlocked and ready to use until it is on your body. The feature has been names “on-body detection.”

Some Android Police readers firstly spotted this feature and some of the posted screenshots explain that this feature can disable the lock screen until the phone has been placed on some surface other than your body like a table.

Must Read: New Android Malware Spies on You even if Your Phone is Off

For example, you will have to unlock the mobile when you use it for the first time and put it in your pocket. However, until the phone is in your hand, pocket or purse, it will stay unlocked and ready for next use. When you place the phone on your desk, it will revert to its usual lock behavior.

Must Read: You can now Send Encrypted Messages to-and-from Android and iOS (FREE!)

One drawback of this feature is that it cannot determine if the person carrying the phone is its real owner or not. Thus, it turns out that it just uses the phone as an accelerometer for determining if it is constantly being moved. If your phone has been snatched or you have given it to your friend, the device will remain unlocked nevertheless, reports The Verge.

Must Read: This Mysterious Android App Emails Your Whereabouts to Stalkers

However, it does offer adequate security option. The feature will be launched on all Nexus devices through an update on Google Play Services and will join the other highly useful security features such as trusted devices, trusted places and trusted faces.