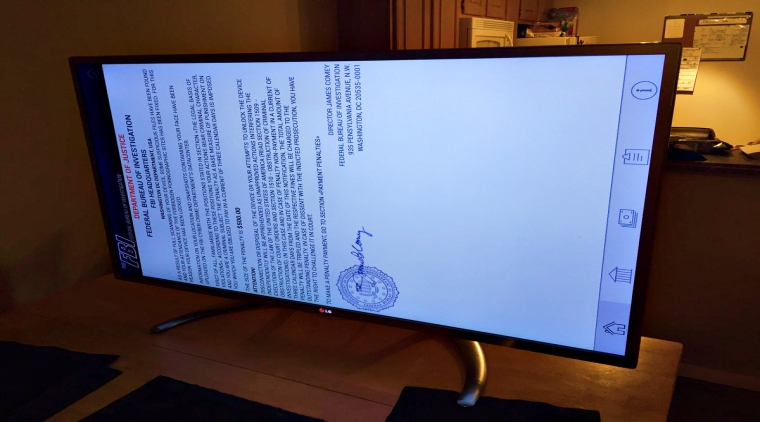 A ransomware infecting a Television should not be surprising for the readers since security researchers have already identified Android-based TV sets are vulnerable to such attacks, but the below-mentioned incident is somewhat brutal.

About two days ago a Twitter user going by the handle of @DarrenCauthon shared a picture with the public showing that an LG smart TV running Google TV belonging to one of his family members was infected with an Android ransomware malware and displaying a ransom note all over the screen and what’s worse is that Cauthon also mentioned that there’s no way out of restarting as the device displays the same ransom note after restart demanding money to get rid of the infection.

“Family member’s tv is bricked by Android malware. #LG won’t disclose factory reset. Avoid these “smart TVs” like the plague,” according to the Tweet from Cauthon.

A zoom in on the ransomware note shows cyber-criminals are posing as someone from the FBI cyber crime unit strictly prohibiting victims from unlocking files on their own and demanding a sum of $500 for decryption of all encrypted files.

Must Read: Be careful of what you say in front our Smart TV, warns Samsung

Here’s the ransom note after rotating it the image clockwise. Source:

The good news is that Cauthon has contacted LG Electronics who have given him detailed instructions on how to perform a factory reset on the TV. Remember, a factory reset, also known as master reset, is a software restore of an electronic device to its original system state by erasing all of the information stored on the device in an attempt to restore the device’s software to its original manufacturer settings.

So @lgus has given me instructions on how to do the factory reset on the tv. I’ll be trying it out after work… fingers crossed!

If Cauthon is successful in getting rid of this malware; it would be a big achievement since it’s not easy to clean a device from a ransomware infection. However, the No More Ransomware portal is still an option. The portal was created by Intel, Kaspersky and Dutch Police to recover encrypted data for free. Until now, the portal has saved 2500 ransomware victims saving 1.3 million Euros.