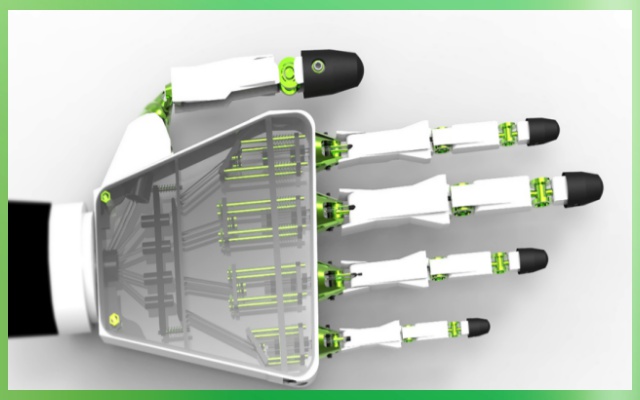 Lately, we have seen some of the most exciting developments in the futuristic manufacturing industry. Irrespective of you being a specialized professional or just a consumer – you have to agree that the rise in the production of 3D printed prosthetic devices took the equipment to some good usage, and all the credit goes to the 3D printing technology!

A couple of weeks ago a student named Fraser Leid, Industrial Design and Innovator, designed a 3D printable prosthetic hand as a project and named it “Prehensile”. His design is nothing like the world has ever seen before. He said that 3D printing has allowed him to entirely reinvent the prosthetic hand. 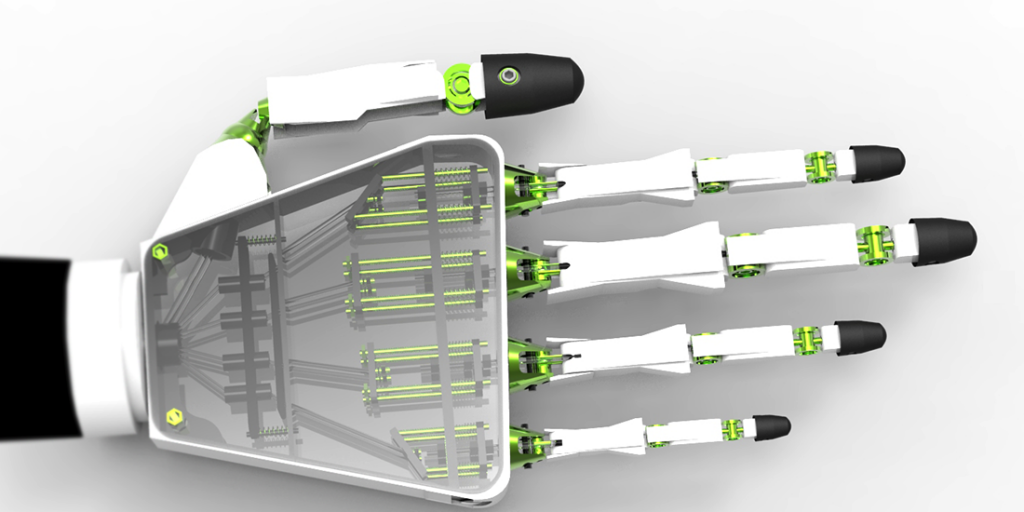 “The Inspiration behind the Printed Prehensile was the idea that it came in a kit — something that a person without the limb would be able to buy and have assembled — which in turn, would greatly lessen the cost of the prosthesis and also allow the user the opportunity to personalise it (Hands building Hands). […] The system is a blend of various thicknesses of ABS Plastic and Aluminum fittings, which either are assembled with cap screws or as a snap-fit. An interesting take on the idea was to integrate Nylon cord as the material required for flexor and extensor movements, as well as individual coiled springs to help the fingers to reset.” 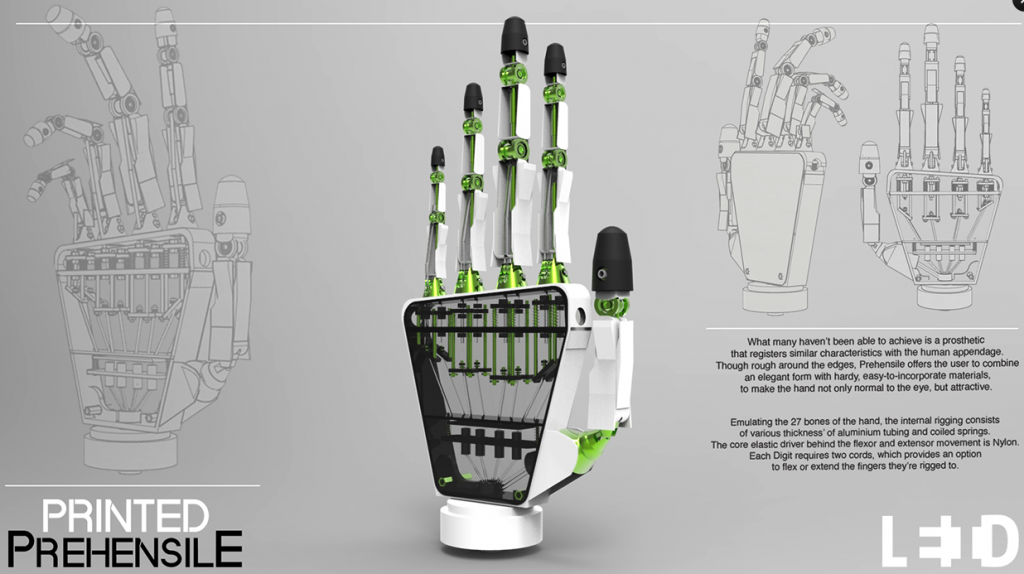 Leid, having merely two years of education in the field of Industrial Designing, has already made impression to a certain extent within the industrial manufacturing business. His projects have already been featured in numerous popular magazines and blogs, he has been referred to several firms in New York, and his achievements give us the impression that he is on the right path to make an impact on the world.

According to the information posted by Leid:

“Many have been able to combine the capability of modelling and printing to create the most amazing utilities. The modification of prosthetics is one such example. What many haven’t been able to achieve is a prosthetic that registers similar characteristics with the human appendage. Though rough around the edges, Prehensile offers the user to combine an elegant form with hardy, easy-to-incorporate materials, to make the hand not only normal to the eye, but attractive.”

The Prehensile’s fingertips are precisely rubberized to allow easy placement as well as gripping of objects. These fingertips are assembled in such a way that they can be replaced without any difficulty in case they deteriorate.

The sophisticated construction of hand and attractive design demonstrates that Leid has built it diligently to imitate the mechanism of a real human hand. His goal was not only to produce a hand that would be ordinary in its appearance but to build a device which would be eye-catching too.

The 3D Printed Prehensile imitates 27 bones of the natural human hand, comprising of aluminium tubing and coiled springs of various widths, which will make sure that it delivers highly reactive functionality. The nylon is used to allow the flexing and extension movements of each finger, and each finger is equipped with two cords. Each of these modules can be printed using ABS plastic, and some of the parts can be assembled using stainless-steel screws while the others can be assembled onto various joints as snap-fit.

The Prehensile hand is split into two categories and consists of two main sectors: 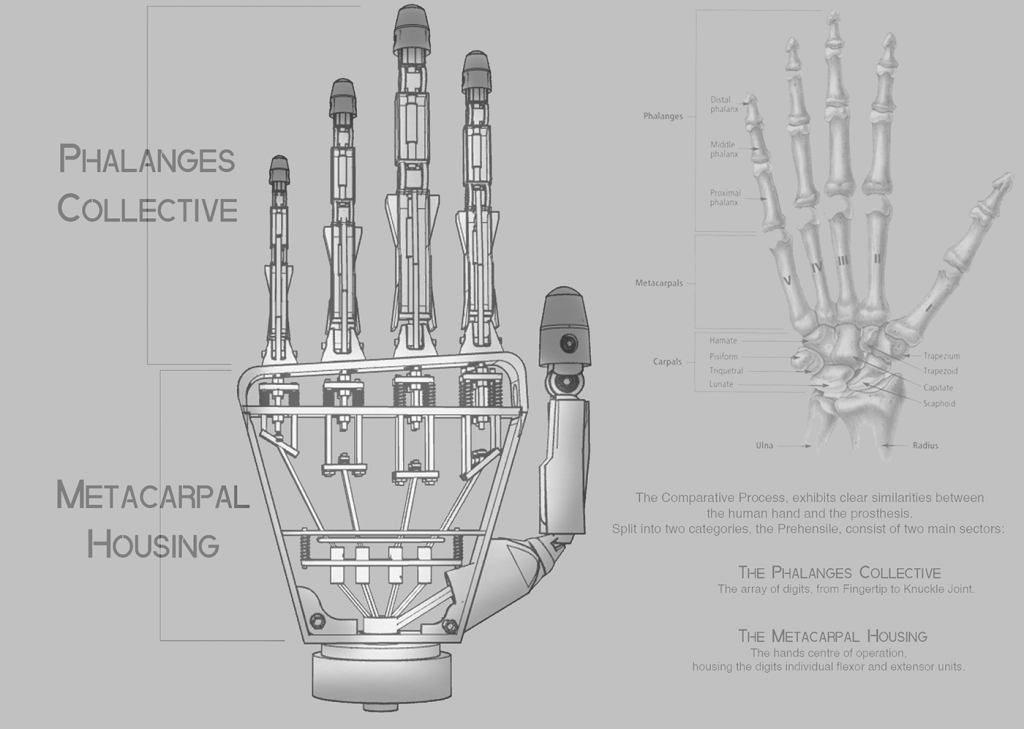 For the folks planned to order these kits will be provided with the STL files for 3D printing and the metal parts. All these individuals have to do is print the parts, depending on their required size, and then assemble the hand.

Leid, while discussing the design, said:

“Something all the more important that I wanted to address, and probably most important of all, was to make the internal mechanics visible because I believe that anatomy of this nature is elegant to witness (Like a skeletonized watch) […] I wanted the wearer to be proud of their prosthesis, not shying away because they have a disability, but to even go so far as to boast about it and to show people how it works. From the feedback I’ve received so far, many are drawn to it because of its presentation. It seems like people enjoy the things that are a little bit out of the ordinary.”

At the moment, the Prehensile hand is still under the modelling phase, but Leid expects that he will be able to present a more superior version within a year.