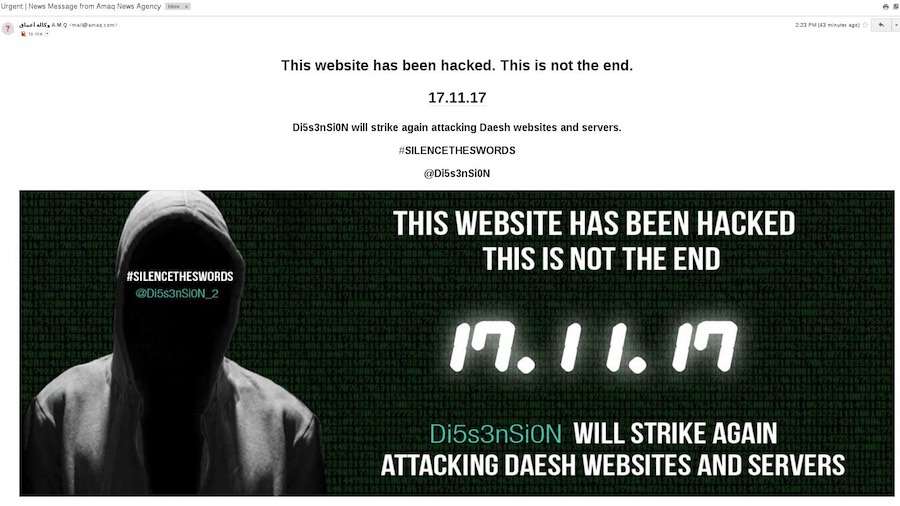 Share
Tweet
Share
Share
Email
The cybercriminals (and their terrorist friends) are, probably, taught to perform their actions in a very covert manner. This means that they don’t openly challenge their opposition. Probably, ISIS propaganda network wasn’t explained how to practice this art.

Amaq is one of the key outlets of ISIS, which issues claims for various terror attacks around the world and updates from different conflicts. This “news agency” has faced numerous cyber attacks from hacktivist and takedowns in the recent times.

Last week, ISIS issued a message and claimed that the security has been increased. “In response to recent events, we have imposed more stringent security measures on our systems,” said the email in Arabic, according to The Independent. “We can now handle email attacks or any type of hack.”

Following this, a Muslim hacking collective named Di5s3nSi0N hacked the email service within three hours. They sent an email to Amaq subscribers with their own logo and warning. The message said that the full secure list of Amaq has been hacked.

Notably, Di5s3nSi0N has disabled Amaq’s services in the past as well. The newly exposed list of subscribers has 1,784 addresses, which were partially verified.

The hacktivist group also wrote on Twitter and shared the update, calling the challenge “too easy.’

Such attacks on the propaganda network of ISIS aren’t new. Due to these crackdowns, Amaq is shifting to encrypted modes of communication and rapidly shifting websites.

Di5s3nSi0N has been carrying out these attacks under the #silencetheswords campaign, which will be completed later this week.

Do you have something to add to this story? Share your views and become a part of the conversation.