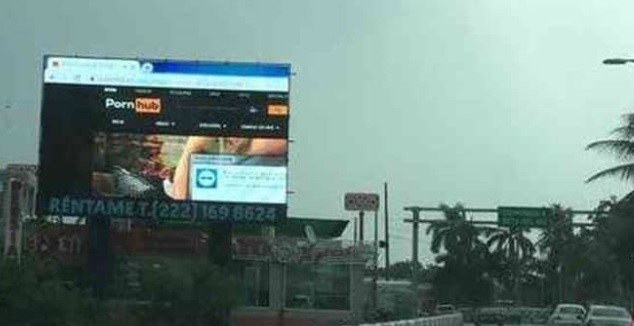 A somewhat unusual incident occurred in the Mexican state of Veracruz. According to experts in ethical hacking, an electronic billboard located in the Boca del Río region displayed pornographic images for a few minutes. This is a touristic area, so the adult content was appreciated by quite a few people.

In this regard, the local government issued a
statement mentioning that the billboard was deactivated as soon as the report
on the incident was received. In addition, local officials shut down the screen
and asked the company to disable the rest of its advertising screens until the
incident is investigated. While the authorities and the company attribute this
to a human factor error, ethical hacking specialists do not rule out the
possibility of a hacker’s intervention.

In the event of a hacking incident, this is not
the first time that one of those screens’ systems is compromised by
unauthorized users in Mexico. Last year, an advertisement located on one of
Mexico City’s most important avenues was compromised by an unidentified threat
actor; just like in the incident in Veracruz, this hacker took control of the
giant screen to display pornographic content.

The incident went viral thanks to some images
captured by surprised motorists driving around the area. However, the
authorities and the affected company did not disclose further reports of the
incident, so to date it is unknown whether the person responsible acted for fun
or if the operating company of these advertisements was the victim of a
cyberattack campaign.

According to ethical hacking specialists,
because these billboards are controlled by simple software from desktop
equipments, it is relatively easy for any user with minimal knowledge to alter
their operation or content shown on the screens.

One of the most remembered cases occurred a
couple of years ago in Cardiff, Wales, where a hacker took control of one of
these advertisements, located on one of the city’s main streets, to display
images related to far-right political ideology as well as posters featuring the
image of Big Brother, the popular character from George Orwell’s book ‘1984’.
Local authorities mentioned that the hacker achieved this after stealing the
login credentials of TeamViewer,
the remote control software for computer systems.

Another recently viral hacked billboard was
identified in Texas, where the contents of a transit electronic screen were altered
to display the phrase “Impeach the bastard,” referring to President
Donald Trump and the impeachment possibility he faces.

One of the most recent, relevant incidents occurred in Auckland, where screens from the Asics sportswear store were hacked to display pornography for more than 8 hours, as reported by the ethical hacking experts from the International Institute of Cyber Security (IICS). Because the incident occurred during the early morning, it was not possible to disable the screens until the store employees began their workday.

So far, the motivations of those responsible for the cyberattack are unknown.