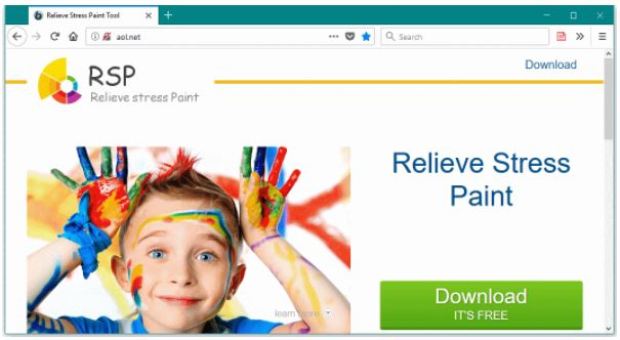 Information security researchers have spotted a new information stealer that collects Chrome login data from infected victims, along with session cookies, and appears to be looking for Facebook details in particular, according to a Radware threat alert the company shared with this reporter.

The new trojan, named Stresspaint, has been found hidden inside a free Windows application named “Relieve Stress Paint,” distributed via аоӏ.net, a domain that uses Unicode characters, which when converted to Punycode spell out xn--80a2a18a.net, instead of the real aol.net.

Users who download this app get a legitimate drawing tool, but the app also runs other files in the background. According to Radware information security researchers, the drawing app also runs:

Temp\DX.exe – the main Stresspaint module that remains persistent on the system

The malware then sets the following Windows registry key to gain boot persistence and run Stresspaint’s DX.exe file with every PC boot:

According to the Radware team, the value of this registry key is DX.exe [parameter].

“We have seen two different parameters which may indicate two different infection campaigns that the author wants to track,” the Radware team says. “This is also represented in the control panel.”

Stresspaint also creates another registry key. This one holds each infected victim’s GUID in the form of “[5 random letters/numbers]HHMMSSYYYYMMDD”.

The malware makes copies of these files so it can run all the queries and operations it needs to extract login credentials and cookie files stored in the user’s Chrome browser.

Crooks accessing Facebook accounts to harvest data. The malware then takes the collected login data and session cookies, encrypts it, and uploads it to a remove C&C panel, along with the user’s GUID.

Radware researchers tracked this data to a control panel available in the Chinese language. The control panel has dedicated sections for displaying Facebook credentials, and another one for Amazon data. This latter section is empty, suggesting attackers have not focused on extracting the Amazon details from the stolen data just yet.

Researchers say crooks are actively validating Facebook credentials and session cookies by logging into accounts and collecting additional data such as each user’s number of friends, whether the account manages a Facebook Page or not, and if the account has a payment method saved in its settings.

Stresspaint infected over 35,000 users. Radware says it identified over 35,000 infected users, most based in Vietnam, Russia, and Pakistan. The trojanized painting app was first seen at the start of the month, but crooks started its mass-distribution only over the weekend.

While the malware is currently pretty well detected on aggregated virus-scanning services like VirusTotal, Stresspaint initially flew under the radar of some security software because it made copies of Chrome’s login and cookies databases and queried the copies instead of attempting to access the original files, usually kept under surveillance by most security software.

The information security researchers have notified Facebook of the malware’s credentials harvesting operations and have also reached out to the domain registrar where the malicious аоӏ.net domain was registered, asking for it to be taken down.

Now Radware information security researchers have spotted changes to Stresspaint’s inner workings, as the malware now uses a new format for the GUID, and some of the files and registry keys created on infected hosts also vary slightly. Nonetheless, besides cosmetic changes to file names and registry keys, the same modus operandi remains.