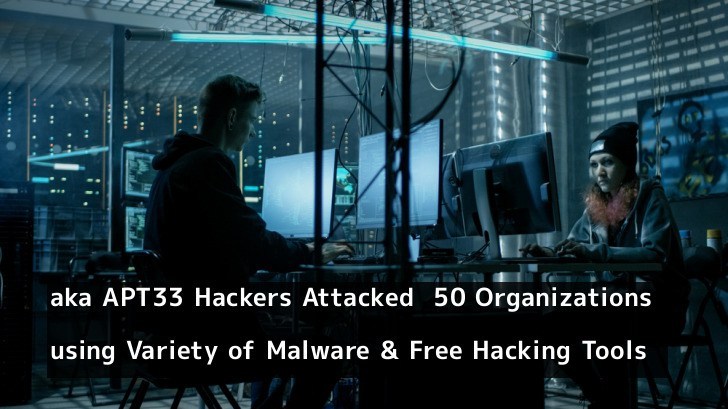 Relentless espionage Group also called as aka APT33 (Elfin) targeting various organization in Saudi Arabia and United States by deploying a variety of malware in their network.

Aka APT33 group specifically targeting corporate networks and it compromised around 50 organizations in different countries since 2015.

Cybercriminals scanning the vulnerable websites of a specific target, later used for either command and control server or malware attacks if the website will be compromised successfully.

so far attackers compromised the wide range of targets including, governments along with organizations in the research, chemical, engineering, manufacturing, consulting, finance, telecoms, and several other sectors.

Aka APT33 group mainly focused on Saudi Arabia, with the 42% of attack since 2016 and its compromised 18 organization in the U.S alone over the past three years.

In this case, Elfin targeted organization including engineering, chemical, research, energy consultancy, finance, IT, and healthcare sectors in the U.S alone.

A very recent campaign, Elfin hackers performed various attempt to exploit the WinRAR vulnerability, and it was mainly used against one target in the chemical sector in Saudi Arabia.

In this case, successfully exploited this vulnerability allow attackers the complete control of vulnerable windows computer and install any file on the system.

Attackers send spear phishing emails to the target and attempt to exploit this WinRAR vulnerability.

During the attack, Elfin Use the variety of open source hacking tools, custom malware, commodity malware to compromise the different target.

In this custom malware family includes Notestuk (Backdoor.Notestuk a malware to open the backdoor and gathering the information, Stonedrill(Trojan.Stonedrill a custom malware capable of opening a backdoor on an infected computer and downloading additional files.

Elfin APT also makes frequent use of a number of publicly available hacking tools, including: