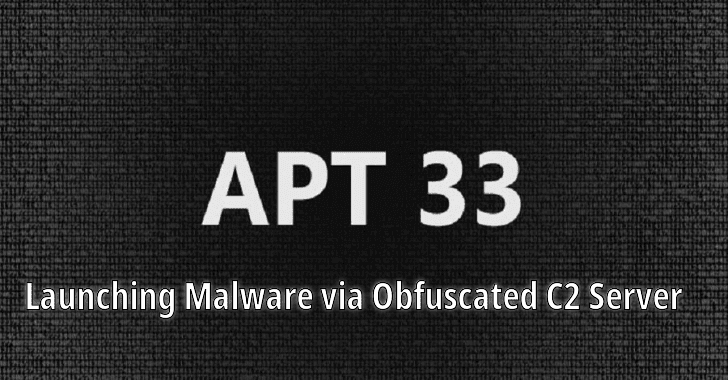 Researchers uncovered a new wave of a targeted cyberattack against the organizations in the Middle East, the U.S., and Asia using an obfuscated Malware with dozen live Command and Control (C&C) botnet servers.

A Well-known threat group is known as APT33 behind the attack, and the group has a record of aggressively attack the oil aviation, governments, engineering, manufacturing, consulting, finance, telecoms, and several other sectors.

A dozen Obfuscated APT33 Botnet C&C servers are using for this malware campaign, and these botnets believed to be comprising a small group up to a dozen infected computers.

Malware that is delivered in this campaign has limited capabilities include downloading additional malware to process further infection.

Compared to other APT groups, APT33 has very aggressive attack records in the past 2 years and they are mostly using spear phishing emails to initiate the attack against the targeted companies.

Several Command and control domains are being used for the small botnet that comprised of dozens of bots, and the C2 domains behind this campaign are hosting in the cloud-hosted proxies.

“These proxies relay URL requests from the infected bots to backends at shared webservers that may host thousands of legitimate domains. The backends report bot data back to a data aggregator and bot control server that is on a dedicated IP address. “

Attackers using a private VPN network to connect the aggregator and issue a command to the bots via a VPN connection.

According to Trend Micro research, Though the connections from private VPN networks usch as OpenVPN still come from seemingly unrelated IP addresses around the world, this kind of traffic is actually easier to track. Once we know that an exit node is mainly being used by a particular actor, we can have a high degree of confidence about the attribution of the connections that are made from the IP addresses of the exit node.

These private VPN exit nodes are also used for reconnaissance of networks that are relevant to the supply chain of the oil industry.

With the help of a Private VPN network, APT33  access websites of penetration testing companies, webmail, websites on vulnerabilities, I also used to read hacker blogs and forums.