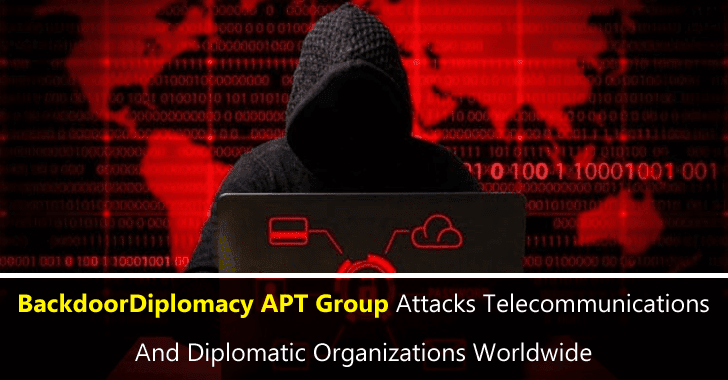 The cybersecurity research team of ESET has recently identified a very new APT group named as BackdoorDiplomacy, attacking telecommunications and diplomatic organizations throughout the world.

According to the report, this group has attacked the Ministries of Foreign Affairs of several countries for the past four years in the Middle East and Africa.

The researchers of the ESET cybersecurity team have claimed that the BackdoorDiplomacy APT group has attacked both Linux and Windows systems. And the hackers have preferred to exploit internet-facing, vulnerable devices as their initial attack vector.

The Hackers of this APT group have been targeting the ministries of foreign affairs of different African countries, Europe, the Middle East, and Asia for many years.

Not only this, even this hacking group has also targeted various telecommunications organizations in Africa and the Middle East.

However, there is no change in the methods and tactics that were used by the hackers of this APT group, it’s all same as the previous attack that is the Quarian.

But the new thing in this attack is that here the hackers have modified all the tools that they have used in their attack campaign.

In this attack, the hackers of BackdoorDiplomacy have specifically targeted the servers that have internet-exposed ports, such as poorly enforced file-upload security or exploiting unpatched vulnerabilities.

The main motive of hackers was to drop the Linux backdoor, that’s why they have exploited an F5 BIP-IP vulnerability (CVE-2020-5902).

Apart from this, a Microsoft exchange server was exploited through a PowerShell dropper that generally installed China Chopper. Here, the China Chopper is a web shell that’s being used by several hacking groups since 2013, and that’s why it’s a well-known web shell.

All the modified tools that were used in this attack by the hackers of BackdoorDiplomacy are mentioned below:-

Quarian is mainly famous for its spearphishing attacks that generally use PDF and doc files as bait. And here, the experts have detected that Quarian was used to target the Syrian Ministry of Foreign Affairs that took place in 2012.

Not only this, but it also attacks the US State Department in 2013; in short, it usually targets the different government agencies all over the world.

However, Turian is the upgraded version of the Quarian backdoor, and it keeps targeting Ministeries of Foreign affairs. And the most common part of both the backdoor is that both of them from the file “cf” that is present in the same directory as the malware’s executable read the initial four bytes.

But, later these files are being used as the sleep length that is part of the C&C beacon routine.

Apart from all these the ESET researchers reported that the BackdoorDiplomacy group has attacked various victims just by collecting data from removable drives such as USB drives.