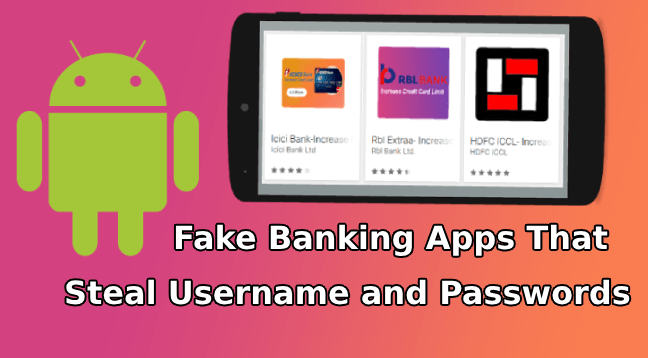 Fake Banking Apps that posing to be from three major Indian banks made way into the official Google Play store. The malicious claiming to increase the credit limit of the three banks.

Attackers use bogus phish forms to collect the credit card details and internet banking credentials from the victims. The Fake Banking Apps appears to be uploaded to Google play between June and July 2018 and it was downloaded by thousands of users.

Security researchers from ESET spotted the apps uploaded under three different developer names, but they are linked to a single attacker.

How Do the Fake Banking Apps Steal Credentials

The Fake banking apps pose to be from three major Indian banks ICICI, RBL, and HDFC. When the user launches the apps it opens a bogus form requesting credit card details, once user submitted the information it asks for their internet banking login credentials.

After submitting the forms with or without entering credentials it leads the users to the final screen and shows “Customer Service Executive” and the app offers no other functionality.

The login forms are not well designed, users who already experienced with the legitimate version of apps can easily distinguish the difference.

The more worst part is that the stolen information from bogus sent to the server in plain text and the server has no authentication which lets anyone access the information.

If you have installed the app it’s time to remove and check your bank account for suspicious activities. Fake Android apps evolving rapidly every day, cybercriminals use numbers of methods to upload malicious apps in play store and continuously targeting users.

Give careful consideration to the permission asked for by applications.
Download applications from trusted sources.
Stay up with the latest version.
Encrypt your devices.
Make frequent backups of important data.
Install anti-malware on their devices.
Stay strict with CIA Cycle.