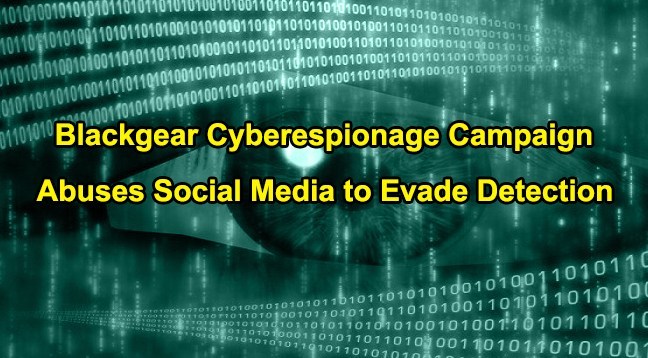 Blackgear Cyberespionage campaign is active at least from 2008, the threat actors behind the campaign use various malware tools such as the Protux and Elirks backdoor.

Trend Micro Security researchers spotted the operators behind Blackgear started using their own tools based on the new attacks. As a notable behavior to avoid detection it abuses Social Media, microblogging and blogging services to hide its command-and-control (C&C) details.

The recent attack campaign starts by sending a spam mail that contains decoy document or fake installer that tempt users clicking into it. The malicious document then extracts the Marade downloader and stores in the Temp folder.

Marade check’s that host can connect to the internet and also for the presence of AV software, if the system doesn’t have AV installed it connects to a Blackgear-controlled public blog or social media to retrieve the encrypted C&C configuration if the system has AV enables it uses the configuration embedded with it.

The encrypted strings pose like a magnetic string to avoid AV detection, later Marade will decrypt it to retrieve information from the C&C server. The C&C server delivers a known backdoor Protux and retrieves C&C information form blog posts and uses open source compiler with RSA algorithm to generate a session key and send back to C&C server.

According to researchers, “Blackgear’s malware tools are delivered to targets using RAR self-extracting executable (SFX) files or office Visual Basic Script (VBScript) to create a decoy document. The encrypted configurations of recent versions of Marade and Protux appear to be similar.”

The new version of Protux comes with a Protux’s remote controller tool that graphical interface and allows attackers to monitor compromised machines.

“Based on the controller’s behavior, we can posit that both Marade and Protux were authored by the same threat actors.”