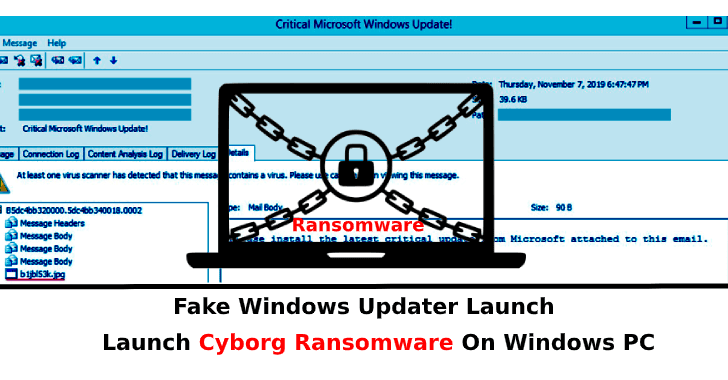 A spam email claims to be from Microsoft and email body urges the victims to Install the Latest “Microsoft Windows Update” by opening the attached file.

Fake update attachment appears with a random name although having a “.jpg” file extension, but is actually an executable file with the file size of 28KB.

Once the victims execute the file, a .NET downloader that will drop another malware on compromised victims’ computers.

Researchers found #Strings section that gives major clues to the executable’s behaviors. One of the notable things is that the hoax Microsoft update will download another executable file from GitHub.

The main ransomware file bitcoingenerator.exe downloaded from the Github account named misterbtc2020 and the file is .NET compiled malware, the Cyborg ransomware.

Successful execution will encrypt the infected user’s system and “.777” has been appended to the encrypted files’ filenames.

Ransom note demands victims to send $500 to their bitcoin wallet and also request victims to reach the attack via email.

Trustwave researchers also found 3 more samples, “The file extension these Cyborg ransomware samples will append to the encrypted files varies as observed from the samples found on VT. This is an indication that a builder for this ransomware exists. “

“The Ransomware can be created and spread by anyone who gets hold of the builder. It can be spammed using other themes and be attached in different forms to evade email gateways.” Trustwave said.