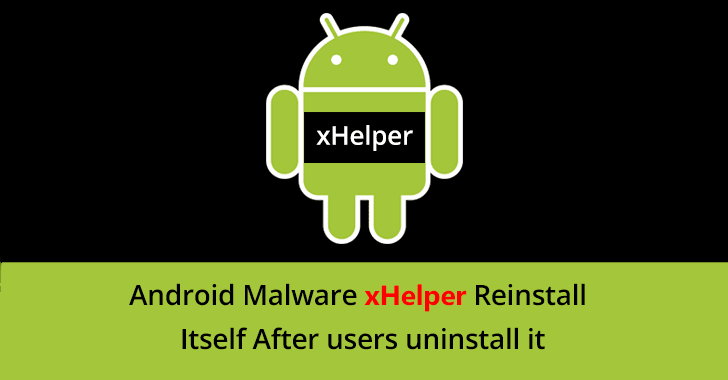 The malicious app is persistent, once the app installed it hides and downloads other malware, displays pop-up ads. The malware found to be downloaded from unknown sources, not available with Google play.

The malware was spotted in earlier May and slowly it climbs to the list of top 10 mobile malware, it targets Android users by masquerade the name of legitimate apps.

Threat actors behind XHelper malware primarily target the Android users in India, the U.S., and Russia. The malicious app infects more than 45,000 devices in the past six months.

According to Symantec analysis, the “XHelper doesn’t have a regular user interface, it is an application component and it won’t be listed in the device’s application launcher. This makes malware more stealthy and performs its malicious activities undercover.”

The mysterious malware cannot be launched manually as it has no available icons, it initiates automatically under certain external events such as the device “connected to or disconnected from a power supply, the device is rebooted, or an app is installed or uninstalled.”

“Once launched, the malware will register itself as a foreground service, lowering its chances of being killed when memory is low and connect’s to attackers C&C server and wait for commands. To avoid communication interception SSL certificate pinning is used.”

With full-stealth version, the xHelper appears only in-app info section.

Once it successfully installed in the device it communicates wit C&C and capable of downloading droppers, clickers, and rootkits to the compromised device.

Researchers believe the development of the app still in progress and they suspect, the attackers may target users of India’s largest 4G network by masquerading the Jio app.