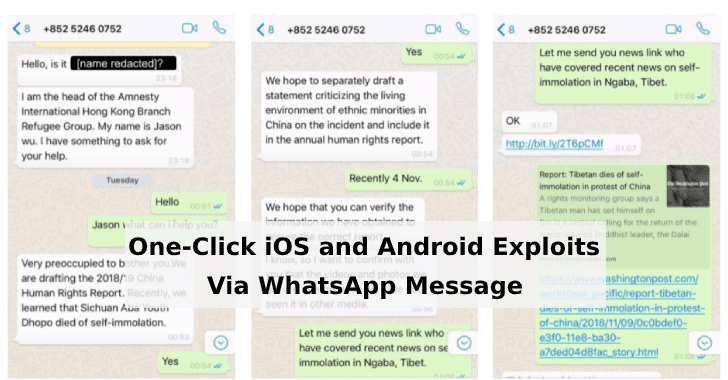 A new highly sophisticated malware campaign targets Tibetan groups to exploit and install spyware on their iPhone and Android devices. The spyware is delivered through WhatsApp message, all user need to do is a single click on the link to get the spyware installed on the device.

The attack is documented as the first one-click mobile exploits and the attacks are carried out by a single threat actor dubbed POISON CARP.

According to Canadian researchers the POISON CARP employees “eight Android browser exploits and one Android spyware kit, as well as one iOS exploit chain and iOS spyware.”

The Fake messages received via WhatsApp are crafted to make it believe it is coming from journalists, the staff at international advocacy organizations, volunteers to Tibetan human rights groups, and tourists to India.

Social Engineering plays a significant role in this campaign, the threat actor engaged in active conversation to infect the targets and to install the spyware on their device.

“Researchers observed 17 intrusion attempts against Tibetan targets, out of that 12 contains links to the iOS exploit, the last attempt was on April 22, 2019. ” In some cases, the threat actor used direct links and sometimes used shorteners like Bitly.

According to Bitly stats as of September 6, 2019, 140 clicks on the iOS exploits and the exploit chain designed targeting iOS versions 11 – 11.4. The exploit chain was reported to Apple security who confirmed both the browser and privilege escalation exploits and it was patched with iOS 11.4.1 in July 2018.

To avoid detection from the intrusion system and to prevent analysis, the exploits and malicious code were encrypted with an ECC Diffie-Hellman (ECDH) key exchange.

The Android Exploit dubbed MOONSHINE, like the iOS exploit it too delivered through WhatsApp, if the targets open the links via Chrome-based Android browser, it asks users to open the link via Facebook app’s built-in Chrome-based web browser.

MOONSHINE includes eight exploit codes, if the link was opened in the browser it checks the user-agent header to see if they are using vulnerable version associated with the exploit. MOONSHINE has exploits starting from Chrome 39-73.

The attack classified into three stages

Whisky Stage – First stage that determines shared library (.so) should be overwritten by the next stage of MOONSHINE dubbed Bourbon.

Bourbon Stage – Second stage, it implants inside if the user open’s an app.