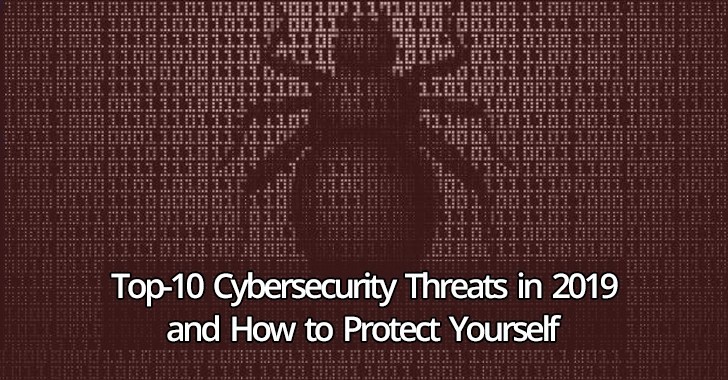 Cybersecurity deals with emerging dangers and includes protecting and preventing means against hacker attacks. New technologies are booming, and our gadgets become more advanced. Both artificial intelligence and machine learning are proliferating.

But, new technologies bring new problems. Cybercriminals are also trying to keep up with the time. Thus, risks to cyber-security are directly related to the goals and objectives of the attackers.

The topic is a hotly debated one, with novelty methods of both defense and attack appearing daily. If you have to submit an assignment related to cybercrime and cybersecurity you might consider services where students can buy research papers to get a deeper insight into the issue.

Ten Risks That Can Jeopardize Cyber Security This Year

It is predicted that various cyber-attacks will continue this year. So, what are the most probable threats to cyber-security in 2019?

1. The Use of Various Stealth Methods

Given
the ongoing development of cyber-security systems and the use of artificial
intelligence (AI) along with machine learning, hackers are going to
increasingly resort to some secretive and unusual methods of carrying out their
attacks, and AI may not be able to detect them.

For
example, it can be the use of files with atypical extensions (.url, .iso, .pub,
and so on) that were not previously used to distribute malware, viruses that
damage the RAM without getting on the hard disk, malicious software with
legitimate digital signatures and remote control, changes in system files that
are imperceptible for antiviruses, etc.

Devices of the Internet of things (IoT) and smart houses can also be targets of digital attacks. This smart equipment is expected to be hacked by criminals more often, so manufacturers have to take into account their vulnerabilities and take actions to increase security measures.

This
year, the massive usage of stolen user data will continue. Taking into account
a huge number of data leaks, we can expect that hackers will actively use the
information obtained. Many people still enter the same passwords and emails to
register on multiple websites, so automatic methods of selection allow hackers
to use it to their advantage.

As a result, attackers will be able, for example, to conduct various transactions on behalf of users, register on multiple websites under stolen personas, use their benefits in loyalty programs, manipulate social media accounts for cyber-propaganda, post fake reviews on online stores, and provide false votes in different polls.

The
spread of fake news is expected to be more intense during the electoral races
in various countries of the world. In 2019, elections must be held in several
states, including Greece and Poland, as well as in some countries of Asia and
Africa.

Many
experts are confident that despite all developers’ effort, the measures taken
to prevent cyber propaganda and influence public opinion through social
networks will not be enough to stop cybercriminals and the tsunami of fake
news.

At the same time, the constant development of new technologies like, for example, Adobe VoCo, complicates the process of separating obvious fakes from actual data dramatically.

4. The Danger for Industrial Enterprises

Cyber-attacks
on control systems of industrial enterprises will become more frequent.
Cyber-criminals and espionage units of some countries can and will use security
vulnerabilities to hack various subsystems to eliminate or severely harm the
activity of potential competitors.

The first objects at risk are energy and water supply facilities, as well as industrial control systems. Such attacks can lead to a halt in production, equipment damage, indirect financial losses, and even a threat to the health of employees.

The
opportunity to work from home (lately from a smart house) and the growing
popularity of the BYOD concept can be a threat to the
security of enterprises.

On
the one hand, many employees feel comfortable to work from home using their
devices and connect to the company’s cloud services from the home network. In
2012, only 14% of employees used this opportunity in the US. According to the Gallup Institute data, their number reached two-thirds by
2018.

On the other hand, hackers might take advantage of this situation because home networks are protected from attacks much less than corporate networks. A home switch or router may well be used as an entry point to attack the company’s system.

Financial
organizations continue to be the top targets for cyber-criminals. The
fundamental motives are the same — getting direct monetary benefits, data for
accessing financial applications, and credit card details.

Among the “trends” of the year, it is also worth noting the proliferation of specific malware for ATM hacks. The present protection of ATMs against hackers’ attacks leaves much to be desired. Today, in the shadow market, it’s not only possible to buy devices with pre-installed malware to “open up” ATMs, but also to get technical support.

Studies
in 2018 demonstrated the insufficient protection of trading terminals that
allow buying and selling stocks, bonds, futures, currency, and other assets. In
60% of cases, an attacker might be able to trade the assets belonging to a
user, get information about the available funds taken from their balance sheet,
replace the automated trading parameters, and view the history and schedule of
financial operations.

In this way, an attacker can increase the value of different securities using the method of mass purchasing on behalf of other people or reduce the cost of shares by actively selling them. Similarly, currency rates can also be manipulated if the attack affects major players or a large number of users. Due to the weak protection of trading applications and the desire of attackers to get fast profit, such misuse of trading systems can turn into a mass phenomenon this year.

Mobile
operators understand the importance of security means and take active steps to
neutralize the main threats. However, the risks of fraudulent transactions in
mobile networks remain significant. Some features of mobile systems do not
allow the complete protection of both users and operators. Not only networks of
previous generations, but also 4G and 5G technologies are still vulnerable.

The results of 2018 have shown that the most practiced method of attacks is offering to install a malicious app on the user’s smartphone. It should also be noted that awareness of the fundamental security in ordinary users remains insufficient, so the number of victims of such attacks will most likely increase in the next 2 or 3 years.

At present, the use of new information technology is at the heart of all spheres of life and businesses. However, as practice shows, even the technologies that have been used for years have drawbacks. Also, the interpenetration of digital technologies like telecommunication, safety, information systems, and different web services also play a significant role in reducing the level of security.

Some vulnerable zones arise at their junctions, offering to cyber-criminals new opportunities for hybrid attacks, that is, attacks that exploit the vulnerabilities of a system using different technologies. Such attacks were noticed before, but they were extremely few.

Now, their number is expected to increase. In this regard, companies must inevitably begin to pay more attention to assessing the real situation in each information system and anticipate bad consequences more accurately.

According to Counterpoint Technology Market Research, hackers will increasingly use remote desktop protocols as a starting point for spreading malware in 2019.

Also, cyber-criminals can create and sell entire software packages to spread malware, which will allow them to apply finished products and carry out attacks, regardless of their own experience in this field.

Analysts predict that individual hackers will form groups to start working together and take advantage of other malware products and the experience of their new “friends.”

Raising awareness of users is not only one of the information security directions but also one of its eternal trends. Fraudsters are actively using social engineering — they manipulate people and use their weak points, such as curiosity, greed, gullibility, fear of authorities, etc.

Therefore, it is necessary to be more attentive to such incidents. Companies should train their employees in safety regulations. Although there are many problems related to cyber-security, the task of security experts, software developers, and company managers is to prevent all those negative scenarios listed above.