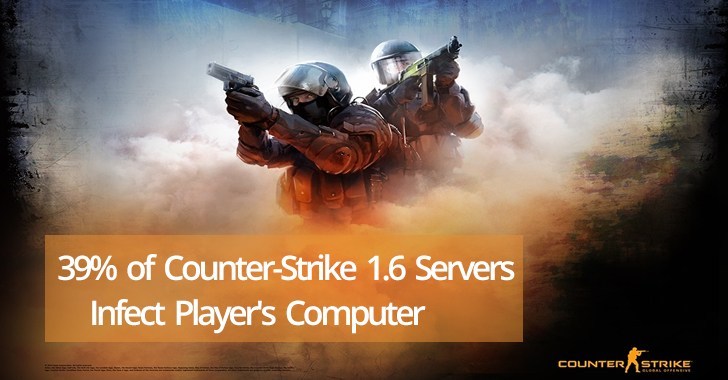 The Counter-Strike game was decades old but still have a huge fan database, according to researchers, 20,000 players using official CS 1.6 clients. The official game client contains two unpatched Remote Code Execution vulnerabilities and four in the pirated one.

A malicious gaming server developer nicknamed, “Belonard”, exploits this RCE vulnerability in the client software of players computer, once they connected with the malicious server.

The malicious gaming server exploits the vulnerability in the player’s device and downloads a Trojan dubbed “Belonard”.

Once the machine infected with the Trojan, it replaces the list of available game servers in the game client and creates proxies on the infected computer to spread the Trojan.

“Using this pattern, the developer of the Trojan managed to create a botnet that makes up a considerable part of the CS 1.6 game servers. According to our analysts, out of some 5,000 servers available from the official Steam client, 1,951 were created by the Belonard Trojan. This is 39% of all game servers,” reads Dr.Web report.

The malicious developer also distributing pirated client version of the game that already infected with the trojan, once the malware launched on the victim’s machine it gains persistence on the system.

Once the player launches the gaming client, connects with a malicious server, it exploits the RCE vulnerability in the client.

“The Trojan’s payload is to emulate a number of fake game servers on the user’s device. To do this, the Trojan transfers information about the game client to the developer’s server and receives encrypted parameters for creating fake servers in response.”

The Trojan attack and gains persistence after the first launch in the device without user consent. Doctor Web’s analysts contacted Russian domain registrar to suspend the domains and stops the botnet from growing.

“At the present moment, Belonard botnet can be considered neutralized; but in order to ensure the safety of Counter-Strike game clients, it is necessary to close current vulnerabilities.”