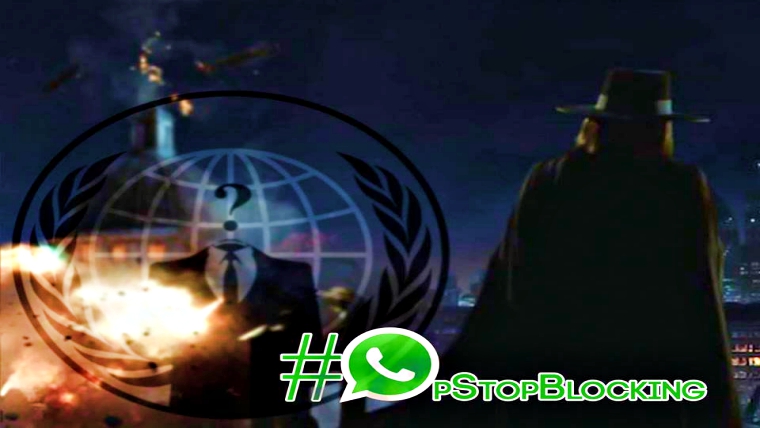 The online hacktivist Anonymous Brazil said on Tuesday (19th) that in a collective cyber attack the group has shut down the official website of the Court of Rio de Janeiro in response to its decision to block the messaging app service WhatsApp in Brazil.

Anonymous Brazil confirmed the attacks on their Facebook page stating that the site remained offline until 14:40 Brazil time. 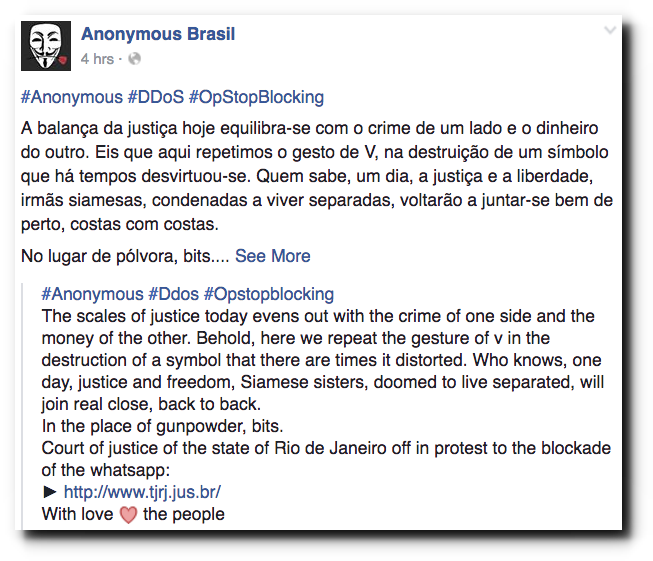 The action of hackers occurred after the Court of Rio ruled to block WhatsApp because the application does not share information about criminal investigations. The decision was made by judge Daniela Barbosa de South of the 2nd Criminal Court of Duque de Caxias County, according to Folha.

“The court order was not met, despite repeated three times, thus the adoption of coercive measures determined by this judgment,” says Souza in the decision that activated the immediate block on WhatsApp.

WhatsApp, on the other hand, does not share users’ conversation with law enforcement agencies in Brazil and argues that it no longer stores users’ conversations. In April 2016, it implemented “end-to-end”encryption (in which only people in the conversation can read messages). With that said, it is impossible to disclose the data.

This is not the first attempt by authorities blocked WhatsApp in the country. In February, a judge in Teresina (PI) ordered to ban the messaging service. The reason behind the ban was WhatsApp’s refusal to provide information to the police about an investigation.

In May this year, a decision of the Court of Sergipe determined that WhatsApp will stay off the air for 72 hours. The process culminated in the decision by the judge Marcel Montalban, in March, to arrest Diego Dzodan, vice president of Facebook in Brazil, the company that owns the app, for Latin America. The judge wanted the company to transfer information on an interstate drug gang for an investigation by the Federal Police, which the company refuses to do.

Telecom companies like Tim Hi, Vivo, Claro, and Nextel- decided to abide by the court decision. Non-compliance would be subject to a daily fine of R $ 500 thousand.

The president of Anatel, John Rao, WhatsApp blockade was “a disproportionate decision because it punishes all users.” For him, “WhatsApp must comply with the court orders within the technical conditions it has. But of course, blocking is not the solution.”

WhatsApp works with computers registry and this makes the lock work quite complicated for the telcos, which can be punished if they fail to implement fully the lock.

In December last year, WhatsApp had been blocked in Brazil for 48 hours due to a criminal investigation. At the time, the telcos were surprised to have received the court order although the decision did not last 48 hours.

In February, a similar case occurred in Piauí, when a judge also ruled a WhatsApp lock in Brazil. The goal was to force the company that owns the application to work with state police investigations related to cases of pedophilia.

At the time of publishing this article, the targeted site was back online while WhatsApp service was also restored in the country.