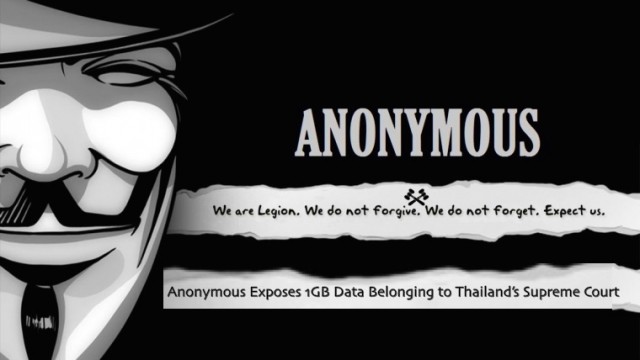 Ten days ago Anonymous launched operation #BoycottThailand and on the tenth day, the notorious hacktivist group had released 1GB data.

The data reportedly belongs to the Supreme Court of Thailand. It seems like the data, which was uploaded yesterday, was stolen last Wednesday when the Anonymous launched DDoS attacks against hundreds of Thai court websites.

The Blink Hacker Group, which is among the many divisions of Anonymous, accidentally stumbled upon this massive wealth of data while attempting to deface Thailand Supreme Court website. The stolen data includes documents, payrolls and other valuable information. Blink Hacker Group is also participating in this operation with Anonymous.

The Blink Hacker Group is also participating in this operation with Anonymous. According to the hackers, apart from information related to the website of the Supreme Court, their team also got hold of data related to the day-to-day operations of the institution.

Evidently, the system administrator of the court believed that it would be a safe bet to use the Web server as a database for storing a variety of information like budget files, payroll slips, pension information and criminal case data.

Not to forget, that the sysadmin stored such massive database on a single machine, thereby making the job of hacker pretty simplistic. So, the hackers stole the data and now have exposed it online, after all, they all are after the unjust Thai justice system and the corrupt ways of the legal and law enforcement departments.

The two workers were accused of raping and murdering two British tourists. In a 37-minute long video, which was released by Anonymous and a press statement, the hacker group explained in detail why it was after Thailand’s police and justice departments.

The group detailed a long list of criminal cases created against the immigrants in Thailand, which were seemingly based upon dodgy evidence.

As per Anonymous, the law enforcement tortured the accused individuals in all the cases and also, surprisingly, in all the listed cases police lost key evidence that could have helped the suspects gain freedom.

Another ironic similarity between the cases as mentioned by Anonymous was that all involved foreign tourists who were visiting Thailand.

Anonymous believes that Thailand justice and law enforcement institutions are making a mockery out of these trials just to keep the country’s image as a tourist haven intact even on the cost of sacrificing lives of the innocent workers/immigrants.

Link for download of 1,09GB info from (Supreme Court of Thailand) contains all of internal info such as staff info https://t.co/QDfJSbeEy8