Details of Over 5,000 Spanish Cops Leaked Online by Anonymous because of Gag law

A couple of weeks ago a hacker going with the handle of HackBack hacked into the servers of Sindicat De Mossos d’Esquadra (SME) or the Catalan Police Union and leaked highly confidential details of officials as a protest against police brutality.

Now, the Spanish Police Department received a hammering from the notorious group of hacktivists Anonymous when one of the hackers claimed to leak personal details of 5,000 Spanish cops online, which includes their names, surnames, personal emails, national ID numbers, and MD5 hash of passwords. 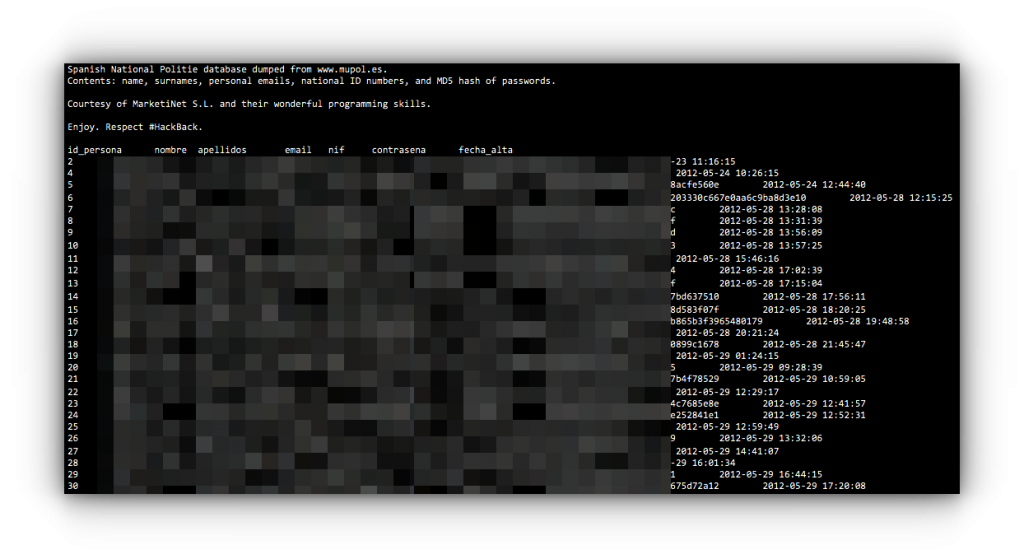 The police revealed that the @FkPoliceAnonOps, was responsible for such a massive data leak. A message was posted as a Tweet from this group informing about the leak that has been carried out as a protest against the gag law.

In 2015, HackRead reported how Spain offers a unique gagging law that has been used in strange ways where people can be fined for posting images of security agencies on social media referring to a woman who was fined 800 euros/$889 USD for posting a picture of the car parked in the disabled spot.

It looks like the hackers gained access to the telecom unit for investigative crimes of the police department and obtained the data ending up dumping it online.

The statement posted by the group using the Twitter handle mentioned above is as follows:

“We are publishing a list of members of your ‘force’ in order to make you understand how thin is the curtain (or the balaclava) behind which you are hiding. Make no mistake, with every action, comes a counter reaction and we all have to pay for our acts!”

“Approximately 5400 police members’ identities will be revealed and dumped into the FREE public domain, together with your ID numbers, emails and password hash. The target was mupol.es, a mutual fund for Spanish policemen.”

At the time of publishing this article, the dumped data was removed from almost all the sites, however, a cache version is still available for public view.