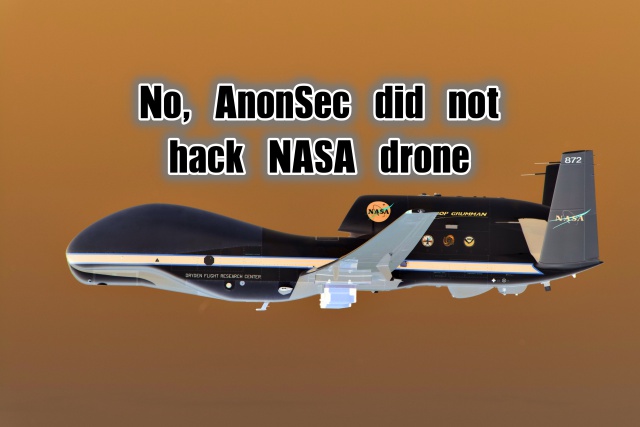 NASA has denied that its drone was hijacked by any hacking group — Earlier a group on Facebook claimed to have hijacked a high-profile NASA drone.

On Wednesday, NASA rejected the claim made by an Anonymous-linked group on Sunday regarding the hacking of one of its high-profile drones. The space agency stated that the 250GB data that the AnonSec hacker group admitted stealing via a complicated process involving compromising of NASA’s networks comprised of information that was already public.

This Sunday, AnonSec made headlines by posting the massive data belonging to NASA on Pastebin, which included around 150GB of drone logs along with names, email addresses and phone numbers of more than 2400 NASA employees.

The hack is as fake as this footage / Gif Source: Jalopnik

The data immediately started featuring on various servers. In the same post, the group also claimed to have obtained “semi-partial control” of one of NASA’s drones that were airborne over the Pacific and was one of the two Northrop Grumman NOC +1.06% Global Hawk unmanned aircraft. This kind of aircraft is used for long-duration, a high-altitude collection of data.

However, the latest news is that NASA has denied the hacker group’s claim about hacking of the drone and has issued the following statement to Forbes:

“Control of our Global Hawk aircraft was not compromised. NASA has no evidence to indicate the alleged hacked data are anything other than already publicly available data. NASA takes cyber-security very seriously and will continue to fully investigate all of these allegations.”

NASA maintains that the agency is always releasing information that is open to public access and therefore, any hacker could steal it and claim to have taken it from NASA’s internal system. For the record, the space agency stated that its Open Data website has around 30,000 datasets that can be viewed by anyone.

A group member, who claimed responsibility for the NASA hack and also whose PGP key and email address were embedded in the exposed data, informed that access to NASA’s network was initially bought in 2013, from a Chinese hacker group. The group paid Chinese hackers in Bitcoin for the network access and from then on they pivoted around the space agency’s network to identify loopholes in its system for exploitation. This information was revealed at a post made on the Twitter handle @_d3f4ult of AnonSec’s admin. The post read:

“They have many [Windows XP] and unpatched Ubuntu servers.”

Regarding the reason behind hacking the famous space agency’s network, the admin stated that it was primarily for the “thrill of hacking NASA. We initially bought access for fun because we wanted to look at NASA systems. Then once we propagated [sic] through the network we eventually stumbled upon a couple Flight Research Centers.”

The Pastebin post in which the data was originally released stated that the move was the result of political motivation because NASA was responsible for “Chemtrails.”

“Chemtrails… do not dissipate at all, instead, they leave streaks across the sky as far as the eye can see. Not only that but since the aerosols are laden with heavy metals and even radioactive material, so they eventually widen and thin into a haze until the entire sky is completely covered.”

Chemtrails are the waste materials left after cloud seeding missions. Still, there is no proof available that the drone that was hijacked belonged to NASA but the evidence of unmanned vehicle hacks did emerge the previous week. In fact, the Intercept reported that GCHQ and NASA managed to compromise video feeds from Israeli drone fleet.