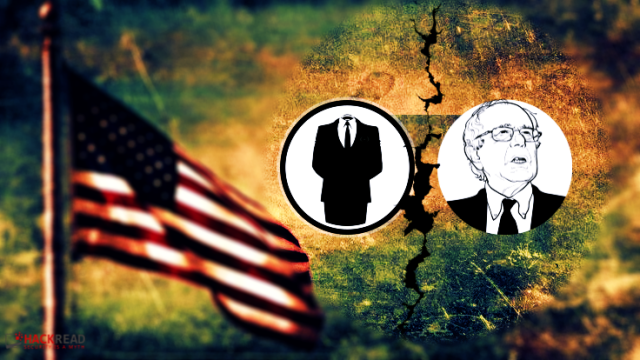 AnonHQ blog claims to be the official voice of the online hacktivist group Anonymous however the reality is far from the truth — The blog has no affiliation with Anonymous, it is rather a click-baiting blog posting conspiracy theory and a bunch of copy paste articles from all over the Internet. The main motive is to earn some bucks in the name of Anonymous.

The reason for giving a background was to highlight a recent article published on the blog claiming that the whole Anonymous movement endorsed American senator and the presidential candidate Mr. Bernie Sanders.

The article provides 10 reasons that should convince people to vote for Mr. Sanders. However, the article had a backlash from Anonymous hacktivists who actually care about the movement and serve their time online to conduct operations against injustice such as OpISIS, OpSafeWinter and OpBayKilling.

Screenshot from the so-called Anonymous blog

FYI: Anonymous endorses no one for president.

Another Anonymous Twitter account with a known following also denied supporting Sanders or any other presidential candidate for this matter.

We do not endorse Bernie Sanders b/c he endorses massacres, fuck him. @revjjo @BernieSanders

The GroupAnon is another twitter account with a huge following and they too have also denied supporting Sanders.

These two tweets are enough to shut down the click bait blogs claiming to be the official voice of the Anonymous movement.

By claiming you’re the official this or that of #Anonymous, you’re claiming to speak for all of Anonymous. Which of course is ridiculous.

Reaction from the readers and fans supporting Anonymous:

@GroupAnon I love & support Bernie, but respect the autonomy & non-bias of Anonymous. Continue 2 even the playing field, pls & thank you.