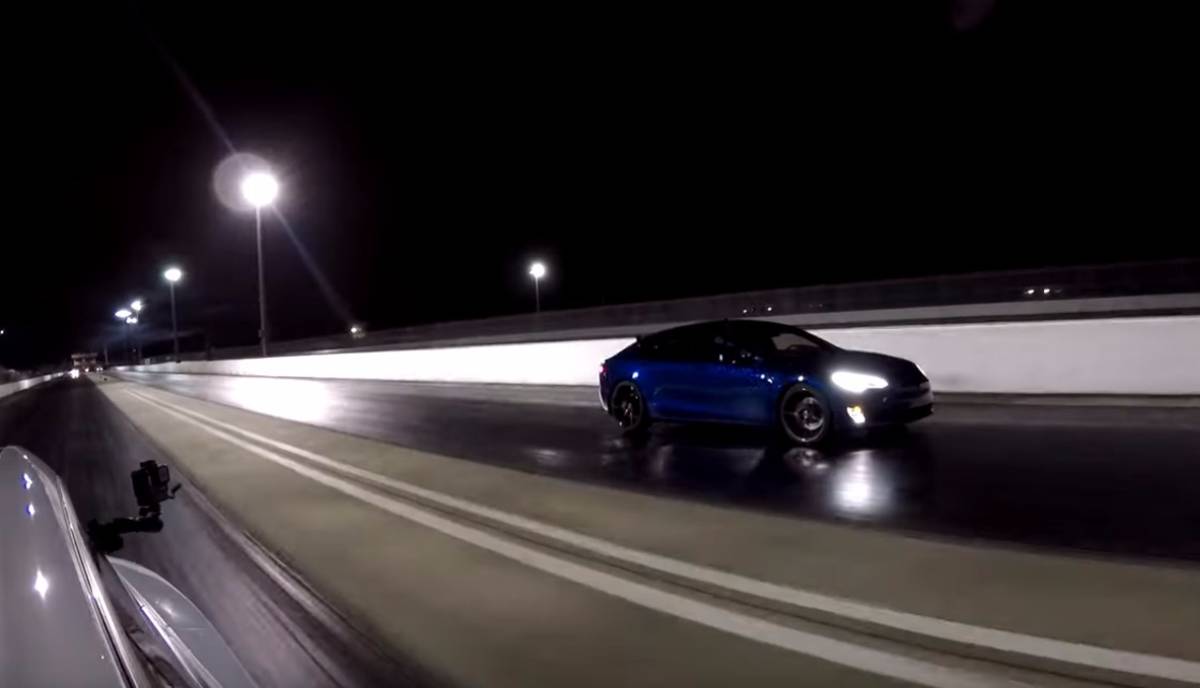 If I say the word ‘High Mileage Tesla Model S,’ what comes to your mind? Is it the image of an old battered up electric car that has battery degradation? If your answer is yes, then I will be glad to disprove your assumption.

Brooks, a drag racing professional, recently tested a high mileage Tesla Model S with around 100,000 miles on its odometer to measure the rate of performance degradation in electric cars.

The Tesla Model S P100D belongs to Brook’s friend, Dan, who bought the car back when it was first launched. Since then, Dan has clocked in 96,000 miles. Therefore, it is the perfect car to test how much of a performance drop an electric car suffers when driven for such a long time and distance.

Brooks analyzed his friend’s Tesla Model S P100D and compared it with his own Model S and Model 3 Performance to get a better idea of the battery degradation. He also ran a quarter-mile drag against his friend’s Model S using his new Model 3 performance.

Brooks revealed the results in his latest video that he published on his channel ‘Drag Times.’ So, here’s how the old Tesla Model S performed.

There’s a lot to unpack in the video, so we’ll take apart one thing at a time. At the start, Brooks clearly says, “As most people in the EV world know, batteries don’t last forever,” indicating that he expects the range of the old Model S to be less than what it was years before.

He quickly follows by asking the question: “If the battery loses life and you get less miles per charge, does that affect the performance of the vehicle?”

Now do keep in mind that all these numbers are before the Ludicrous+ firmware update. So if you’d compare a new Model S in 2019 with the one launched a few years ago, the former would be faster.

After clocking in 96,000 miles, the battery range of the Model S was reduced to 285 miles, which is around a 10% decrease. But remember that this ‘decrease’ in the Tesla Model S is not fixed and will vary depending upon the way you charge your battery.

Brooks said that when his friend’s Tesla Model S was brand new, he competed against it using his Lamborghini Huracan. The Model S ran a quarter-mile in 10.82 seconds at a speed of 122.93 mph while the Huracan crossed the line in 10.84 seconds at 127.23 mph.

After 96,000 miles, the Tesla Model S will now face-off against a brand new Model 3 Performance. Brooks kept both cars at full charge, using a generator that he bought along with him to the drag race strip.

During the first race, the Model 3 and the high mileage Tesla Model S were pretty neck-to-neck. However, the Model 3 won by a slight margin of 0.064 seconds.

In the second race, the driver of the Tesla Model S botched up the launch, hence losing again to Brook’s Model 3 by 0.605 seconds.

It was revealed in the video that the high mileage Model S produced around 50 less HP or 39 kW less power than before. The car still ran from 0-60 mph in 2.5 seconds but suffered a loss in performance at the very top end.

Earlier, the Model S P100D could run a quarter-mile in around 10 seconds at a speed of 123 mph. But after racking up so many miles, the quarter-mile timing dipped a second into 11 seconds, and the car’s top speed is now reduced to 117 mph.

Is It Worth It To Buy A Second Hand Tesla Electric Car?

The simple answer is yes. We have seen with Tesla electric cars that they tend to last a very long time. A Tesla Model S recently completed 1 million kilometers, or around 621,731 miles, granted with the help of a second battery, of course, but it is still a remarkable achievement for an electric car.

Another YouTuber, Sean Mitchell, also bought a used Tesla Model S and got the old battery replaced for better performance. In his long term review, he said that his Model S was way cheaper to run and maintain than his Audi A4.

Tesla electric cars are not just great EVs but amazing cars in general. They’re safe to run and relatively affordable to maintain as well. The High Mileage Tesla Model S we saw today has clearly been to a drag strip several times throughout its life. Therefore, any daily driven Model S would comparably have less range and performance degradation than this one.

Brooks also said he would test battery degradation at different points. He also has a relatively less old Tesla Model S with 50,000 miles on it, and he’d test in the future to see what kind of performance or range degradation it suffers from.