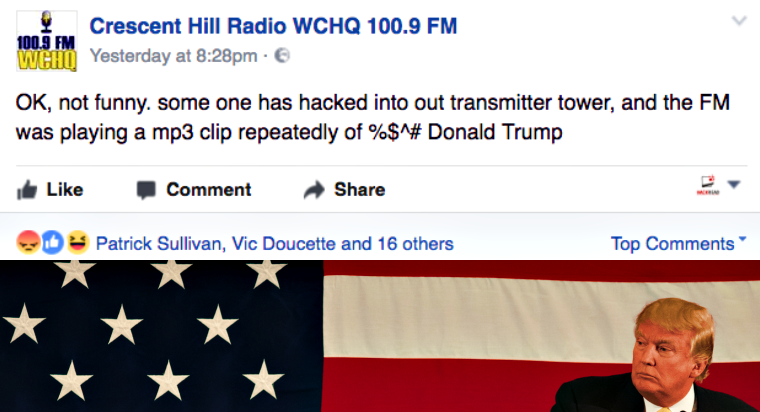 A popular, non-profit radio station in Louisville “Crescent Hill Radio WCHQ 100.9 FM” posted on Facebook that hackers hijacked their station on Friday afternoon and an anti-trump song was broadcast on it instead of regular transmission. The Facebook post appeared on the radio station’s page at 2:30 pm on Friday.

The post read: “OK, not funny. Someone has hacked into out transmitter tower, and the FM was playing an mp3 clip repeatedly of %$^# Donald Trump.”

Gary Sampson, the WCHQ program director, says that the song that was broadcast was sung by rap artists YG & Nipsey Hussle. The song was titled “FDT (F*** Donald Trump).” 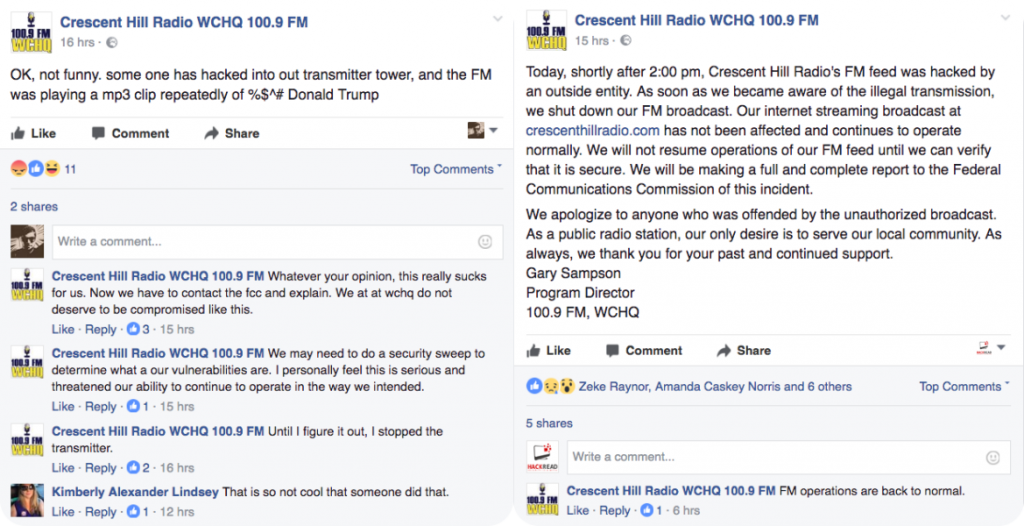 Sampson further explained that this particular song interrupted the WXCHQ’s FM Feed and continually played on the station for 15 minutes. Then Kathy Weisbach, the station manager, somehow broke this loop.

However, the damage had already been done since the song that was played automatically was strictly against the policy and vision of WCHQ, which was to remain a neutral and unbiased radio station for the entire community. Their main focus is to highlight and promote local talent from Southern Indiana and Kentucky.

Sampson added that they deliberately avoid touching sensitive issues and subjects like politics and religion. “It’s a matter of providing a community outlet for musicians and artists. It’s very disheartening that someone would take the opportunity to make a political statement. I want to apologize to people who might have heard it and might have been offended. We kind of feel like we’re being used,” he continued.

The Courier-Journal reports that the WCHQ will be lodging a complaint with the Federal Communications Commission because of the profanity that surfaces this rap song.

Sampson believes that it isn’t a coincidence that this hack occurred on the very day when Trump was to be sworn in as United States’ president. As far as the hack attack is concerned, Sampson revealed that the attackers accessed and compromised the airwaves using software that the radio station uses for broadcasting its FM. This software allows emergency broadcasts including government warnings. Therefore, the software is capable of interrupting the live transmission signal of the station at the transmitter tower.

Info Read: 8 Technologies That Can Hack Into Your Offline Computer and Phone

The hackers, according to Sampson, most probably used this software to intercept and override the program that was already on-air at the time of hack. However, the station’s internet broadcast stayed unaffected from the hack.

The song that was being played by hackers:

The software is a relatively common one since a lot of other FM stations use it too and hence, the possibility cannot be ruled out that other stations might have been hacked at the same time. However, there haven’t been any reports similar to Louisville station’s claim.