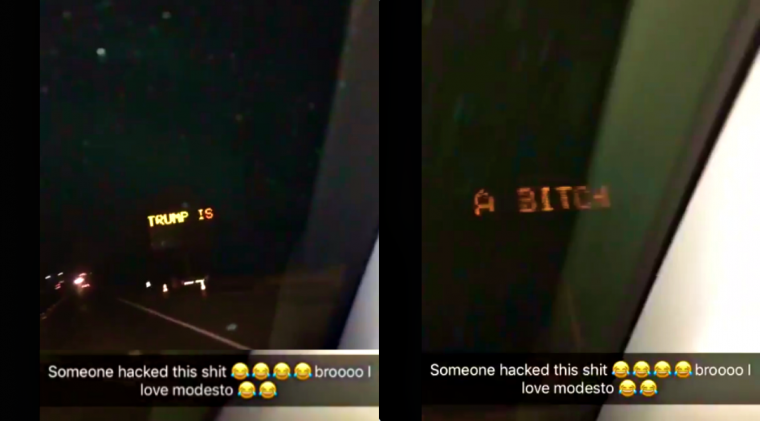 Why hack websites when you can hack electronic sign boards for political reasons – That’s excatly what happened in Modesto city as witnessed by local residents.

On the eve of September 11, an electronic road sign in the city of Modesto, California was hacked and defaced with a message against the President of the United States Donald Trump. The first person to notice the deface was Makayla Victoria, a Modesto resident who shared the clip on her Twitter account showing the message stating that “Trump a Bit*h.”

Watch the clip below:

“Trump is a bitch” someone hacked into this shit good job Modesto ? #TrumpABitch pic.twitter.com/8Vm6ogEGpk

Although the road sign was hacked on Monday, September 11th, Cynthia Londo, another Modesto resident told media that she and her husband passed the sign on Tuesday and she couldn’t stop laughing indicating that the sign was still hacked.

Stanislaus County Public Works Director Matt Machado told CBS that “We have typos from time to time, contractors will type in a word wrong, but you can see the intent is there, just a misspelling.”

On the other hand, the Highways staff can’t fix the issue until replacement parts arrive.

Hacking electronic road signs has become a popular trend. Previously, in two separate incidents, electronic road signs were defaced with messages in favor and against the President. In one of the hacks, the message urged users to vote for Donald Trump while the other asked for his impeachment.

In some cases, road signs were defaced against police brutality leaving abusive messages against cops. There were several other incidents of road signs hacking, some of them were hilarious so don’t wait, check our exclusive list of 24 funny, upsetting and shocking hacked traffic signs.