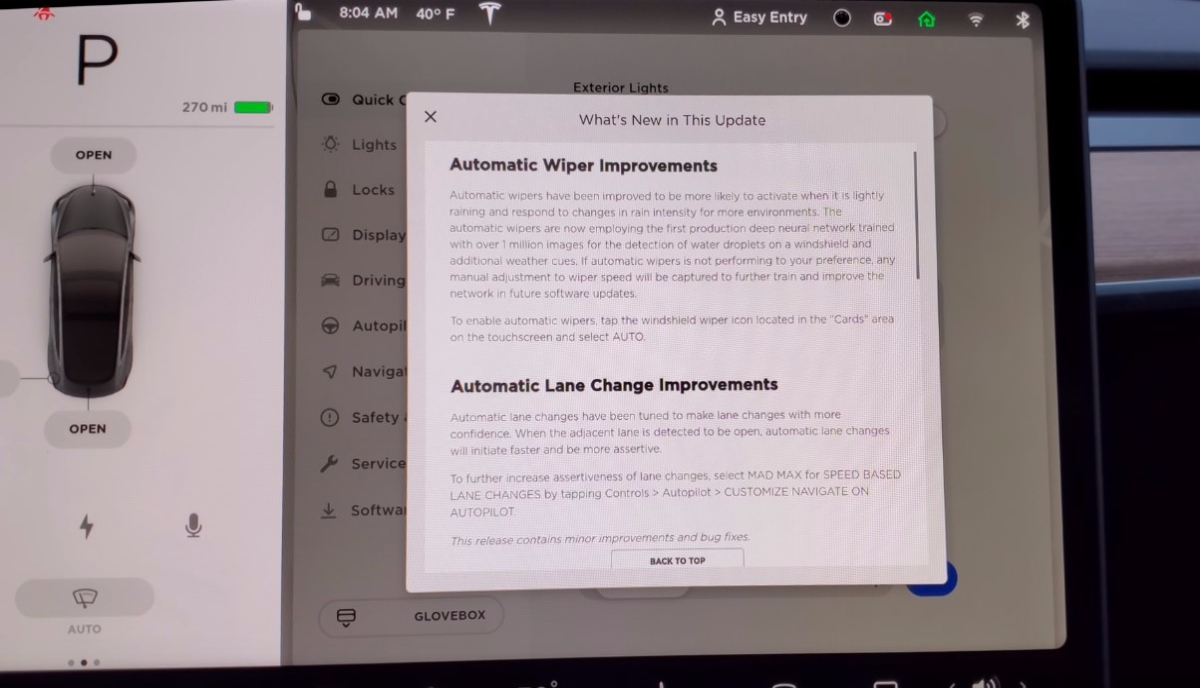 The channel’s host tested a number of new changes mentioned in the release note of the update. He found that the Mad Max lane change setting now works more aggressively and the issue with the automatic wipers being too slow has also been resolved.

The presenter also found that his Tesla Model 3 was able to operate on Autopilot at ultra-low speeds, to help the car during difficult maneuvers like going through a roundabout. Watch his lane change testing video below to find out more.

The presenter begins his testing by putting the car into Autopilot and testing the upgraded Mad Max lane change setting. He showed us that as soon as he clicked the turn signal his Tesla Model 3 changed lanes.

According to him, earlier the lane change used to be very slow and his Model 3 used to first monitor the environment around him before doing anything. After the new 2019.40.1.1 Tesla Software update, his car performed instant lane changes as soon as he clicked the turn signal.

The presenter then took his Model 3 to test the lane change on the highway by overtaking some vehicles. However, in this case, the Autopilot didn’t perform as expected. his Model 3 kept going in the passing lane even after he sped up to overtake the car in front of it.

The new lane changes are immediate but do not in any way lessen the driver’s confidence on the road. “It’s (The Autopilot) is taking into account that you know it’s safe when you hit the turn signal.” says the presenter.

Later on, the presenter discovered that after the new update, his Model 3 could operate on Autopilot, even at a standstill. Earlier, the minimum driving speed for Autopilot was 18 mph, now it can be lowered even to zero mph.

According to the presenter, this setting would allow the car to maneuver around difficult turns on Autopilot quite easily. He tested the same new feature on a roundabout but the car didn’t quite nail it through.

At the end, he tested the automatic setting on the windshield wipers. In the early section of the video, he shows us how the pre-update wipers weren’t able to detect the residual raindrops on the windshield.

This is why the owner kept his wiper settings always at 3. However, after the update, the wipers performed brilliantly. They successfully detected the water droplets and quite aggressively wiped them off the windscreen.

The presenter explained that the new Wipers utilize the first Neural Net called Deep Rain by Tesla. Automatic wipers have been trained with images of thousands of images of rainfall and can now detect any form of moisture very easily.

In any case, if the wiper doesn’t work on its own and the user has to operate it manually, the sensors will record that distance and learn from it to get better.

Needless to say, the Tesla Model 3 software update brings some really great features, however, the lane change feature, without any manual input, still remains quite slow.

Have you received the new Tesla update yet? Let us know in the comments or reach out to me via e-mail.