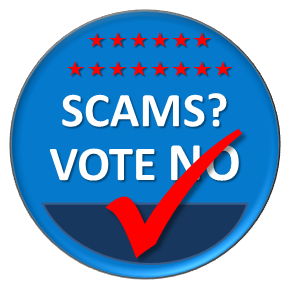 As the Better Business Bureau recently warned, scam artists are gearing up for the Presidential election season. So what pitfalls do consumers face during the final stretch of campaigning, on computers and on the phone? Recently, we’ve seen examples of phony phone calls, phony websites seeking donations, and there may be more to come. Regular

As the Better Business Bureau recently warned, scam artists are gearing up for the Presidential election season. So what pitfalls do consumers face during the final stretch of campaigning, on computers and on the phone? Recently, we’ve seen examples of phony phone calls, phony websites seeking donations, and there may be more to come. Regular

As the Better Business Bureau recently warned, scam artists are gearing up for the Presidential election season. So what pitfalls do consumers face during the final stretch of campaigning, on computers and on the phone? Recently, we’ve seen examples of phony phone calls, phony websites seeking donations, and there may be more to come.

Regular readers of this blog will know that scammers are apt to employ ANY hot topic as a hook to catch the gullible, tricking people into downloading malware, giving up personal information, or money, or both. So what’s out there at the moment in election-land? Let’s start with fake donation websites.

Consumer advocate and Reuters’ contributor Mitch Lipka reported two phony donation sites recently, using the names DemocraticNationalCommittee.org and RepublicanNationalCommittee.org. Both are the work of the same person, talk about bipartisan! And nothing to do with the Republican or Democratic parties, even though the sites looked quite convincing (they have been changing since they were discovered).

The scam is pretty straightforward: A private individual registers official sounding domains and builds websites that look like they belong to legitimate political organizations, then crafts a Donate button that sends money directly to his or her PayPal account. The alleged fraudster has since argued that the sites were not fraudulent because they contained small print disavowing any connection to the election or political parties (probably the lamest fraud defense I’ve ever read). Here’s one of these sites: How do you avoid scams like this? Well, you could simply choose not to give any money to any politician or political party. Less drastic, limit donations to checks that you mail to known good addresses, or hand over in person to people you know are working for the candidates and causes that you support. That might sound drastically defensive but it is a good strategy that I particularly recommend for some people, like elderly relatives. Of course, it is possible to donate online and not get ripped off if you stick to familiar websites that have proved reliable in the past. But be careful of counterfeit sites at all times.

The way you get to a website is often a key factor in scams. For example, if you have been on a specific political mailing list for some time, links from those messages are probably okay (just double-check the URL when you get to the website and make sure it is https in the URL bar not http). But if you see a political ad or politically-flavored link on Facebook or in Twitter, or some random email from a previous unknown source, resist the urge to click.

Like many consumers you are probably on the Do Not Call list which was created by the federal government to cut down on annoying sales calls. Companies that ignore the Do Not Call list face stiff fines. But our national obsession with free speech led to a major exemption from those rules: political phone calls, including surveys. That has led some scam artists to use political surveys as a cover. One example of this has been described in detail by my colleague Aryeh Goretsky in these two blog posts: Press One if by LAN, Two if by Seaâ€¦ and Close Call with a Caribbean Cruise Line Scam.

The scam goes like this: The caller asks you to participate in a short political survey and tells you that you have won a free cruise. All you have to do is let the caller put the non-refundable port fees on your credit card. Hopefully you will have hung up long before then.

Here are some more scams you might be seeing or hearing this election season. Major hat tip to BBB for some of these.

Your utility bill: Take it from the Better Business Bureau, “President Obama is not going to pay your utility bill.” As the BBB describes the scam: “Consumers have been contacted through fliers, social media, text messages, and even door-to-door with claims that President Obama is providing credits or applying payments to utility bills. Scammers claim they need the consumer’s Social Security and bank routing numbers to arrange the payments.” While the scammer may give the victim a bank routing number they claim will pay their utility bills, it doesn’t. In the meantime, the scammer has everything they need to empty your bank account and steal your identity.

Fundraising phone calls: As you might expect, some scammers are simply calling up random victims and asking for a donation over the phone (with an increasing sense of urgency as election day nears). I would not donate that way, verifying legitimate callers is just too tricky (the BBB says some scammers are even set up to handle call-back verification). I suggest you make the call when you are ready to donate, unless the caller is personally known to you (Fred down at party headquarters).

Eligibility to vote scams: Hang up the phone right away if someone calls about your voter registration and asks for credit card or Social Security number. Likewise send emails asking for such info straight to the trash. Deal only with the proper state agencies and trusted friends or family members when it comes to voter registration.

The vote itself: The scams we’re talking about here involve fraudsters trying to talk you out of money and exploitable personal data, not efforts to rig electronic voting. But we looked at electronic vote rigging last year and the news was not reassuring. A recent USA Today editorial shows that concerns over accuracy of electronic voting, and its potential for being hacked, have not gone away. Maybe cause for another blog post.

If you have encountered an election related scam, please let us know with a comment/reply to this post. By sharing our experiences we can educate each other.