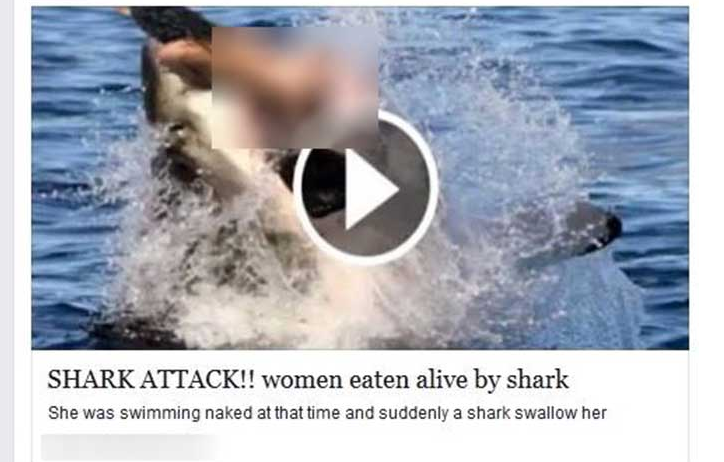 The latest salacious video – promising ‘Naked Woman Eaten by a Shark’ – is just one in a long chain of viral video scams spread via Faceboook.

The latest salacious video – promising ‘Naked Woman Eaten by a Shark’ – is just one in a long chain of viral video scams spread via Faceboook.

Malware evolves and social networks change – but some cybercriminal tricks remain the same, especially in the realm of Facebook scams.

The latest salacious video – promising ‘Naked Woman Eaten by a Shark’ – is just one in a long chain of viral video scams spread via Faceboook, according to IB Times.

The teaser image of the video hints that it is hosted on YouTube – and it includes a large Play button, Hoax-Slayer reports.

But as is always the case with these scams, there is no video, no matter how many links you click – all that will happen is you will infect your computer with malware.

Hoax Slayer says, “However, when you click on any of the teaser images, a popup message will claim that you must install a plugin before you can watch any videos. But, alas, the plugin is a malware program that can hijack your browser, show malicious advertisements, and interfere with security settings on your computer.”

The tactic is a common one, and violent content is one of the most common lures used to pull victims into this sort of Facebook scam.

Scammers often target Facebook with copies of viral content – or entirely fake, sensational videos, such as ‘Giant Snake Swallows Zookeeper’, as reported by We Live Security this year.

ESET researcher Stephen Cobb offers a We Live Security Guide to spotting Facebook scams, saying “Can we trust our friends not to make questionable decisions on social media? Apparently not, because our friends might actually be scammers in disguise, or just not well-informed.”

In many cases, scam videos will install a ‘rogue’ Facebook app to spread rapidly via the network – but as reported by We Live Security here, such scams can, in the worst case scenario, lead to tainted sites which infect users with malware.