Google is facing a $5 billion lawsuit for allegedly tracking your browsing activities via Chrome’s Incognito Mode.

Google introduced the Incognito Mode in Chrome to prevent the browser from storing cookies or browsing history when you surf the web. However, it turns out that the tech giant has made some very tall claims, and you aren’t browsing privately under the Incognito mode.

The class-action lawsuit accusing Google LLC of misrepresenting Chrome’s privacy features and tracking users’ online activities was filed on Tuesday in the U.S. District Court for the Northern District of California and plaintiffs are seeking $5 billion in damages, that’s $5,000 for each of the users of Incognito Mode since June 2016.

It is worth noting that in 2018, internet search engine DuckDuckGo (DDG) that emphasizes protecting searchers’ privacy released a study claiming that Google Incognito searches are not private and that the company “tailors search results regardless of browsing mode.”

Now, according to the court filing [PDF], Google is found to be persistently tracking and collecting consumers browsing history and web activities regardless of the “safeguards consumers undertake to protect their data privacy.”

This is in sharp contrast to Google’s claim that users can control what information they want to be shared or collected when using Chrome. The docket further revealed that every time a user opens a new incognito tab, the websites can collect browsing activity information for that session.

It is worth noting that the Incognito tab does display a disclaimer that some of the activity might be visible to the website(s) ISPs, employers, and schools a user visits. However, the three complainants have alleged that Google violates the Federal Wiretap Act and California privacy laws, and the disclaimer is not enough.

Furthermore, the lawsuit, filed in San Jose California, alleges that Google’s parent company Alphabet has violated the privacy laws by using Google Ad Manager, Google Analytics, and website plugins to store data from the mobile and desktop versions of Chrome when incognito mode is enabled.

It is highly unlikely that the lawsuit will be successful because of the warning displayed when a user switches to Incognito Mode. Nevertheless, it does serve as a timely reminder that private browsing mode is nothing else but a myth. 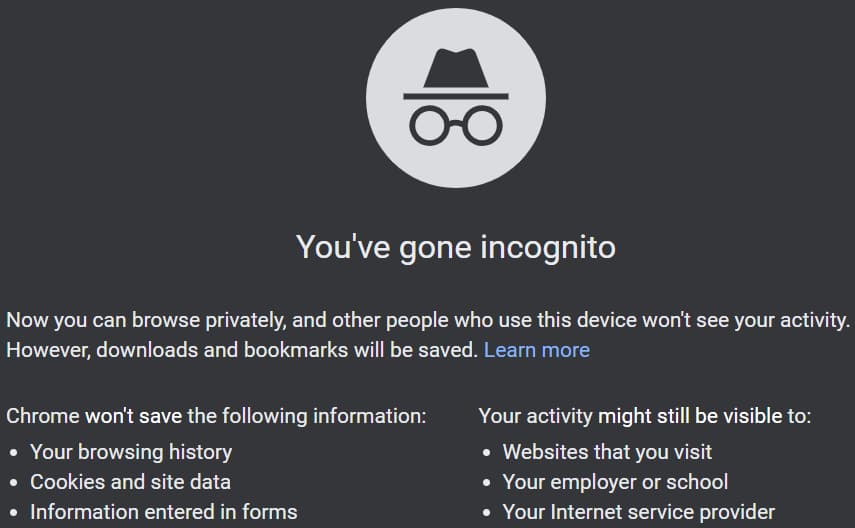 Hence, instead of blindly relying upon features like the Incognito Mode, you must use a variety of different security measures to safeguard your privacy. Such as, you can use a VPN to redirect web traffic via a remote server.