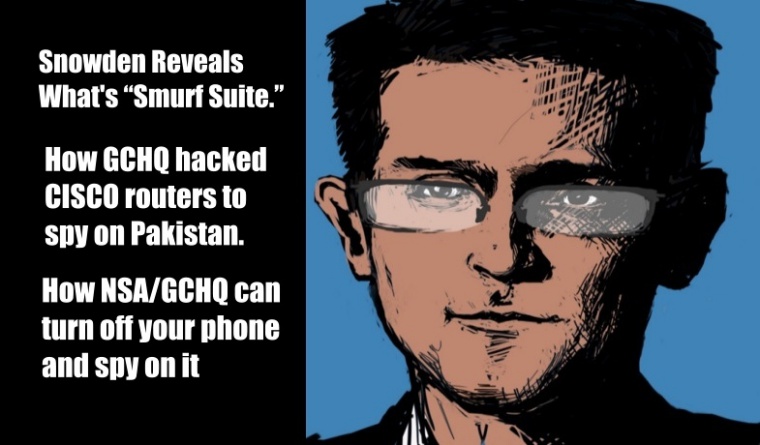 Since joining Twitter, Edward Snowden is more active than ever. In his latest revelation, the whistleblower has claimed that the British intelligence agency (GCHQ) obtained a massive amount of communication data that was travelling through Pakistan in its search for terrorists.

This identification spree from the Britain involved hacking into routers of users back in Pakistan, which were created by an American firm, Cisco.

He revealed something called the GCHQ “Smurf Suite” and discussed it at length in one of his latest interviews with the BBC’s Panorama.

Smurf Suite was a collection of secret interception abilities and the project was named so after the tiny blue characters of the Belgian cartoon The Smurfs. [squaread][/squaread]

Paranoid Smurf  hides the fact that it has taken control of the phone. The tool will stop people from recognising that the phone has been tampered with if it is taken in for a service, for instance.

“Dreamy Smurf is the power management tool which means turning your phone on and off with you knowing.”

“Nosey Smurf is the ‘hot mic’ tool. For example if it’s in your pocket, [GCHQ] can turn the microphone on and listen to everything that’s going on around you – even if your phone is switched off because they’ve got the other tools for turning it on.”

“Tracker Smurf is a geo-location tool which allows [GCHQ] to follow you with a greater precision than you would get from the typical triangulation of cellphone towers.”

After gaining access to a handset, GCHQ would check:

“Who you call, what you’ve texted, the things you’ve browsed, the list of your contacts, the places you’ve been, the wireless networks that your phone is associated with. And they can do much more. They can photograph you.”

Also, Snowden stated that this spying was conducted with British government’s permission. As apparent, the aim was to identify terrorists.

Since June 2013, Snowden has been living in exile in Russia.