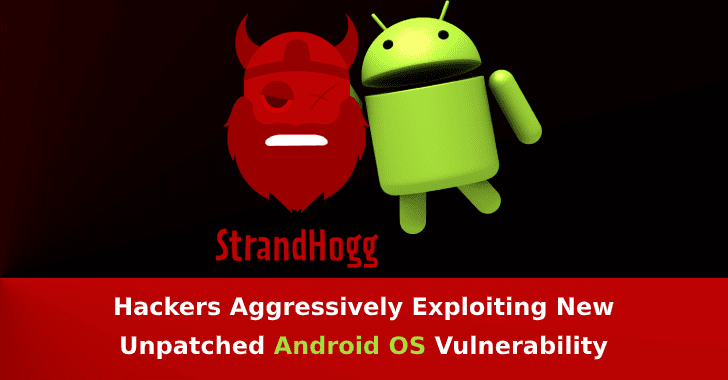 The vulnerability allows attackers to infect the Android phone without root access, and it affects all the android version including Android 10.

Researchers confirmed that 36 malicious apps are exploiting the vulnerability, and the top 500 most used apps are at risk for this vulnerability.

Dubbed Strandhogg vulnerability in Android OS discovered by Promon, an app protection company that specializing in In-App Protection for both Android and Windows.

Strandhogg vulnerability in the Android allows a malicious app to display an Activity in the UI context of another app. which means, it enables hackers to perform screen overlays attack via malicious banking trojan to gain the apps permission.

Sadly still the vulnerability has not yet been fixed for any version of Android (incl. Android 10).

Attackers mainly infecting Android users via droppers apps distributed via Google Play, Google removed some of the strange apps that posed a threat to Android users, but still, attackers introducing the new dropper apps and downloaders to infect users phone with malware.

At the initial stage of infection, malicious apps that posed a legitimate one requesting to users any sensitive permissions including SMS, photos, microphone, and GPS, allowing them to read messages, view photos and more.

According to Promon research, “The attack can be designed to request permissions which would be natural for different targeted apps to request, in turn lowering suspicion from victims. Users are unaware that they are giving permission to the hacker and not the authentic app they believe they are using.”

If they entered any sensitive data such as credentials on the screen, it directly sends to the attackers who can then login to, and control, security-sensitive apps, then the normal legitimate screen will have appeared.

” StrandHogg, unique because it enables sophisticated attacks without the need for a device to be rooted, uses a weakness in the multitasking system of Android to enact powerful attacks that allows malicious apps to masquerade as any other app on the device. This exploit is based on an Android control setting called ‘taskAffinity’ which allows any app – including malicious ones – to freely assume any identity in the multitasking system they desire. ” Researchers said.