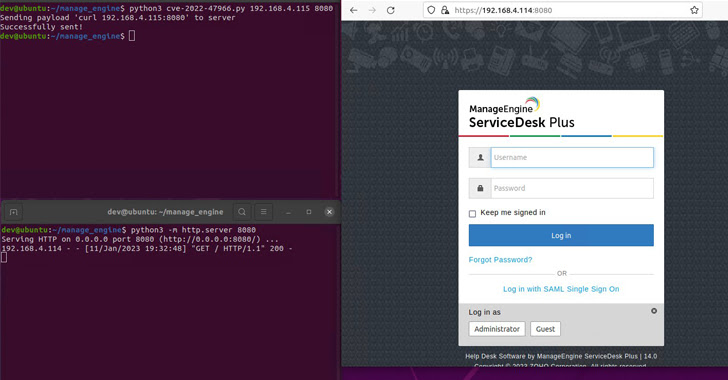 Users of Zoho ManageEngine are being urged to patch their instances against a critical security vulnerability ahead of the release of a proof-of-concept (PoC) exploit code.

The issue in question is CVE-2022-47966, an unauthenticated remote code execution vulnerability affecting several products due to the use of an outdated third-party dependency, Apache Santuario.

“This vulnerability allows an unauthenticated adversary to execute arbitrary code,” Zoho warned in an advisory issued late last year, noting that it affects all ManageEngine setups that have the SAML single sign-on (SSO) feature enabled, or had it enabled in the past.

Horizon3.ai has now released Indicators of Compromise (IOCs) associated with the flaw, stating that it was able to successfully reproduce the exploit against ManageEngine ServiceDesk Plus and ManageEngine Endpoint Central products.

“The vulnerability is easy to exploit and a good candidate for attackers to ‘spray and pray’ across the internet,” researcher James Horseman said. “This vulnerability allows for remote code execution as NT AUTHORITYSYSTEM, essentially giving an attacker complete control over the system.”

An attacker in possession of such elevated privileges could weaponize it to steal credentials with the goal of conducting lateral movement, the San Francisco-headquartered firm said, adding the threat actor will need to send a specially crafted SAML request to trigger the exploit.

Horizon3.ai further called attention to the fact that there are more than 1,000 instances of ManageEngine products exposed to the internet with SAML currently enabled, potentially turning them into lucrative targets.

It’s not uncommon for hackers to exploit awareness of a major vulnerability for malicious campaigns. It’s therefore essential that the fixes are installed as soon as possible irrespective of the SAML configuration.

“Organizations using any of the affected products […] should update immediately and review unpatched systems for signs of compromise, as exploit code is publicly available and exploitation has already begun,” Rapid7 researcher Glenn Thorpe said.