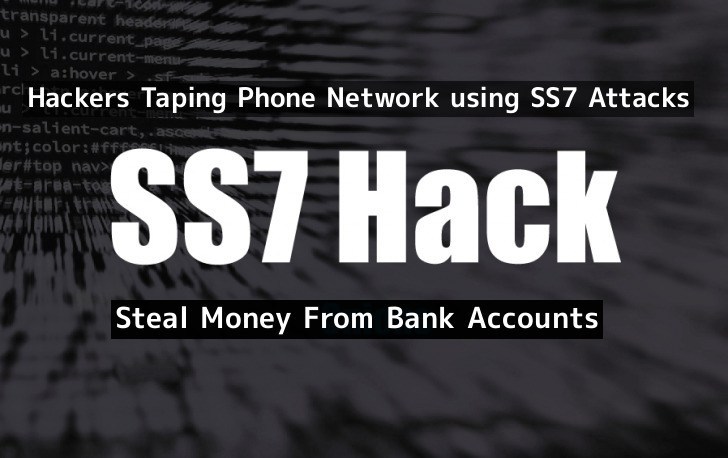 New research states that sophisticated hackers are now taping the Phone network by exploiting the SS7 protocol to steal money from the bank accounts by intercepting the messages.

SS7( Signaling System No. 7) protocol used by Internet service providers and telecom companies to control the phone calls and text messages around the world.

Basically, these controls are extremely limited and some time the access can be provided to the intelligence agencies or surveillance contractors for a legitimate purpose since it is a very serious concern about sensitive data and privacy of users.

According to the motherboard statement, but now this capability is much more widely available in the hands of financially-driven cybercriminal groups, who are using it to empty bank accounts.

Based on the confirmation given by the National Cyber Security Centre (NCSC), the defensive arm of the UK’s signals intelligence agency GCHQ, SS7 attacks are using by cybercriminals to intercept the messages to steal the code that used for bank transaction.

NCSC said that “We are aware of a known telecommunications vulnerability being exploited to target bank accounts by intercepting SMS text messages used as 2-Factor Authentication (2FA).”

Basically, SS7 Network doesn’t authenticate who send the request and pass it into even if anyone gains the access, it considers as a regardless of accessing users who can be a government agency, a surveillance company, or a criminal.

Since the bank accounts are under authentication, by having network access, cybercriminals can be intercepted the messages after they gaining access the internet banking login credentials using phishing attack and initiate verification code via text message.Later they intercept it via SS7 attack and using it to complete their transaction process.

“something that members of the general public don’t necessarily have to worry about. An SS7 attack is unlikely to be effective if the bank uses a form of 2FA that doesn’t rely on text messages, such as an authenticator app.”

Some of The Telecom Service Provides Statements

Vodafone spoke person said to Motherboard, “We have specific security measures in place to protect our customers against SS7 vulnerabilities that have been deployed over the last few years, and we have no evidence to suggest that Vodafone customers have been affected.”

Also they states that, Vodafone working with GSMA, banks and security experts in order to mitigate and protect their customers.

Major UK telco BT said, “We’re aware of the potential of SS7 to be used to try to commit banking fraud. Customer security is our top priority so we’re always upgrading our systems and working with the industry and banks to help protect our customers.”